Palm oil is a type of edible vegetable oil. It is also a fruit oil, like olive oil, because it is extracted from the mesocarp (flesh) of the oil palm’s fruits. In crude form, palm oil is semi-solid at room temperature and bright orange-red in color. This is due, respectively, to 50:50 unsaturated & saturated fatty acid composition of the oil and the presence of carotenes, which are abundant in the oil.

Being semi-solid at room temperature, palm oil has a competitive edge against competing ‘soft’ vegetable oil like soybean, sunflower and rapeseed oils because it can be readily used for semi-solid and solid food applications (such as making margarine and a donut). Unlike palm oil,  the oil of soybean, rapeseed and sunflower needs to undergo a ‘hardening’ process known as hydrogenation prior to use in these applications. The health issue associated with hydrogenation is that the process, while adding cost to food manufacturers, also produces  harmful trans fat in the final products.

The versatility of palm oil in the food applications can be further enhanced with fractionation process. In this process, palm oil is physically fractionated into a liquid portion (called olein) and a liquid portion (called stearin). Olein is normally known as cooking oil while stearin is used as a solid fat. Subsequent fractionation on these portions will produce a variety of downstream products such as super olien, palm mid-fraction,super stearin and mid-stearin, which have different physical characteristics and applications.

Today, palm oil is the leading commodity in the global oils and fats market. It has led the other competing vegetable oils and fats in terms of production, exports and consumption since 2005. This is mainly due to three factors associated with palm oil, which the competing oils and fats cannot match. These are abundant & uninterrupted supply all year long, versatility in food and non-food applications, as well as competitive trading prices.

The Oil Palm in Malaysia

1870s: The oil palm was introduced to Peninsular Malaysia, then Malaya, as an ornamental plant

1917: The first commercial planting of the oil palm took place when Henri Fauconnier planted this crop at his Tennamaram Estate in Batang Berjuntai, Selangor.

1960s: The cultivation of the oil palm in Malaysia accelerated with the implementation of the government’s agricultural diversification program to ease dependence on rubber and tin 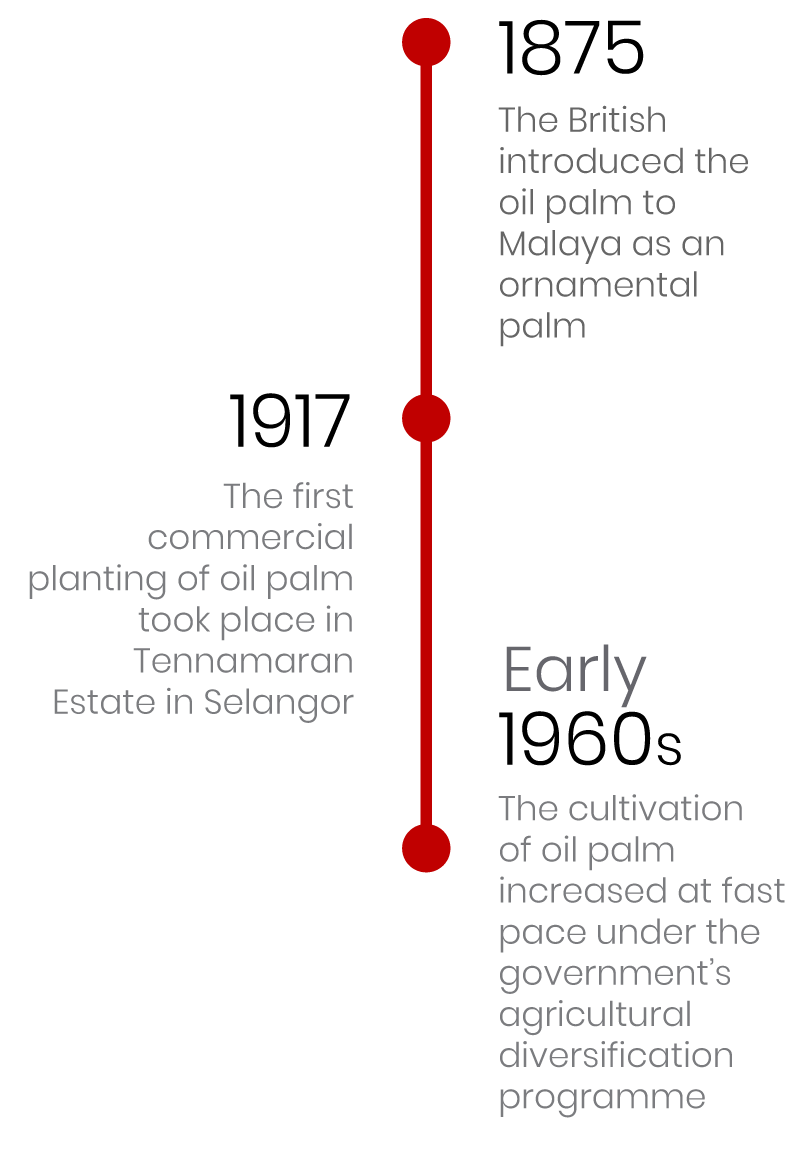 The oil palm (Elaeisguineensis) originates from West Africa; where it is found growing in the wild in the tropical rainforest of the region. It was introduced to Peninsular Malaysia, then Malaya, in the early 1870s by the British as an ornamental plant.

In 1917, the first commercial planting of the oil palm took place at Tennamaran Estate in Batang Berjuntai,  Selangor. Facing a bleak business in coffee, Henri Fauconnier learned about palm oil from his friend in Sumatra, Indonesia, who had planted the oil palm for its oil for several years. Encouraged by his friend’s success, Fauconnier replaced his coffee plantation at Tennamaram Estate with the oil palm; laying the foundations for the development of the palm oil industry in Malaysia.

Shortly after Malaysia achieved its Independence in 1957, the government introduced an agricultural diversification program to reduce the county’s economic reliance on rubber and tin while alleviating rural poverty. One commodity crop that could meet the government’s objectives at once was the oil palm due to its high economic returns, faster maturity and labor-intensive. As a result, the cultivation of the oil palm increased tremendously in the 1960s. In 1989, the oil palm surpassed rubber as Malaysia’s main commodity crop.

Unlike other crops, the oil palm produces two different  types of vegetable oil from the same fruit. The dominant palm oil is produced from the mesocarp while its sibling oil, palm kernel oil, is derived from the seed (kernel). While both these oils are edible, palm oil is commonly used for production of food while palm kernel oil is predominantly used for production of non-food products.  The ability to produce more than one type of vegetable oil, long economic lifespan and high productivity per ha of land, makes the oil palm the world’s most efficient oil crop.

At the end of 2020, the oil palm covered about 5.9 mil ha or 18% of total land area in Malaysia; producing 19.14 mil tonnes of palm oil and 2.20 tonnes of palm kernel oil. The palm oil industry also provided RM 73.25 bil in export revenues and accounted for 3.6% of Malaysia’s total GDP. Palm oil has also elevated Malaysia to become the world’s second largest palm oil producing and exporting country. Today, Malaysia accounts for 25.8% and 34.3% of the world’s palm oil production and export; respectively.

“Malaysia is the second largest producer and exporter of palm oil in the world, accounting for 25.8% and  34.3% of the world’s production and export, respectively”​

Oil palms will start bearing fruits after 30 months of field planting and will continue to be productive for the next 25 to 30 years; thus ensuring a consistent supply of oil. Each ripe bunch is commonly known as Fresh Fruit Bunch (FFB). In Malaysia, the oil palm trees planted are mainly the tenera variety, a hybrid between the dura and pisifera. The tenera variety yields about 4 to 5 tonnes of Crude Palm Oil (CPO) per hectare per year and about 1 tonne of palm kernels. The oil palm is the most efficient oil-bearing crop in the world, requiring only 0.26 hectares of land to produce one tonne of oil while soybean, sunflower and rapeseed require 2.22, 2.0, and 1.52 hectares, respectively, to produce the same. 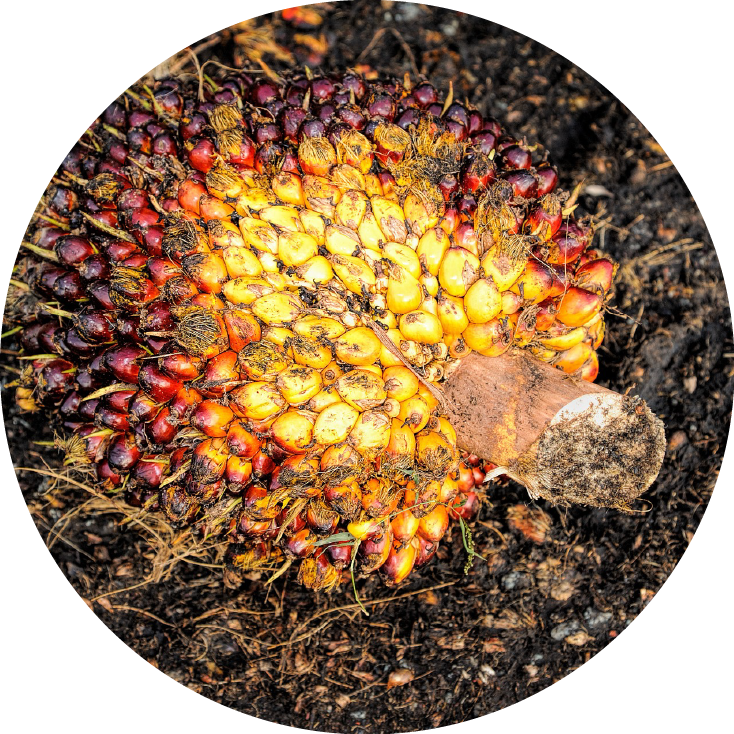 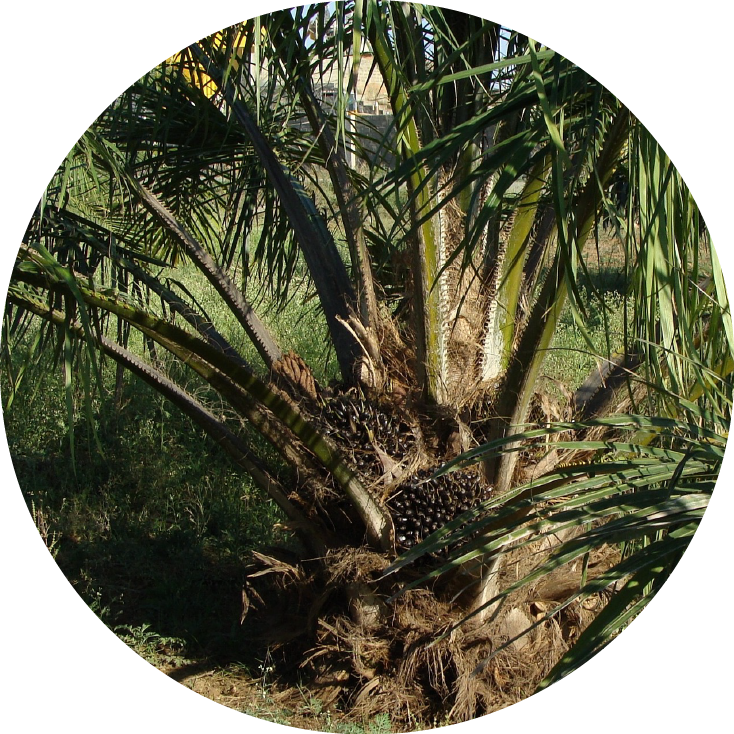 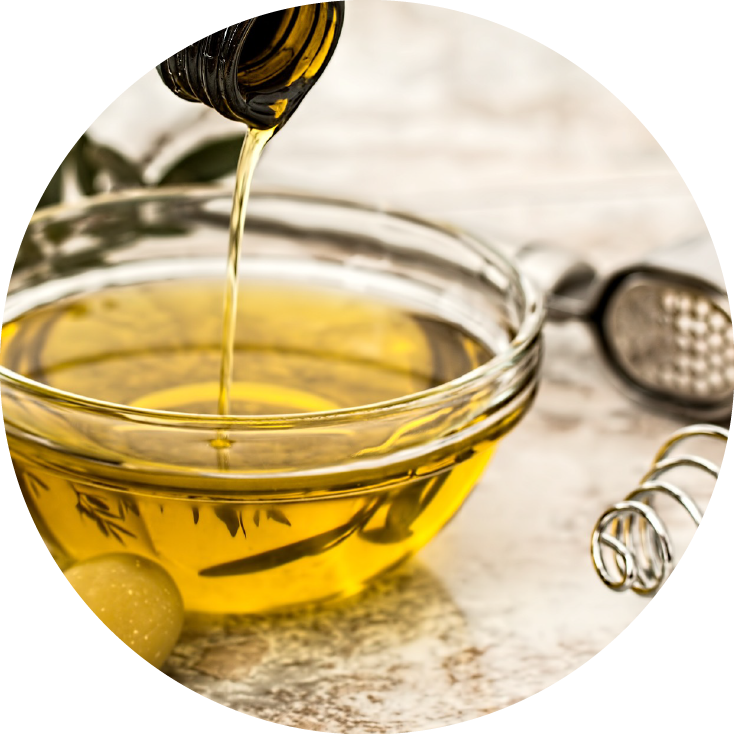 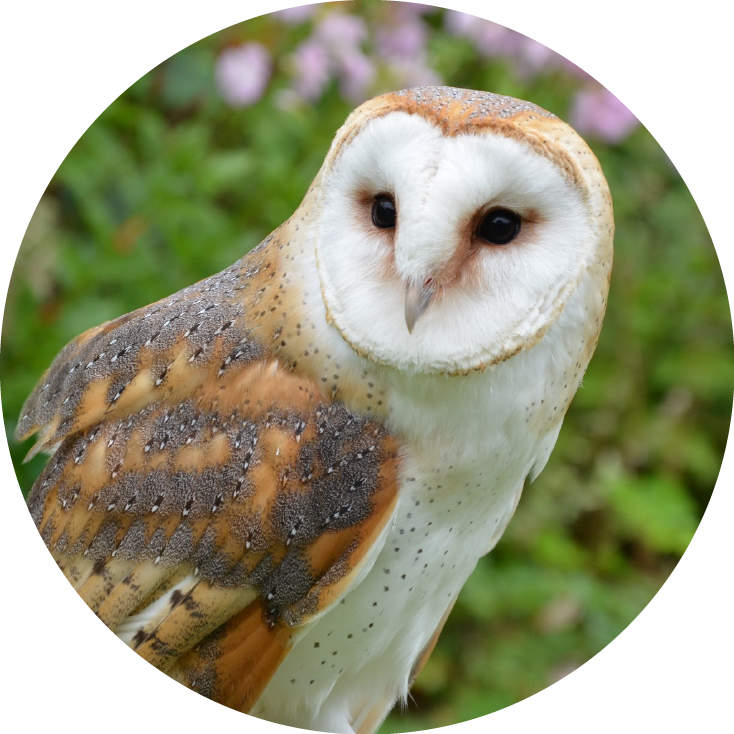 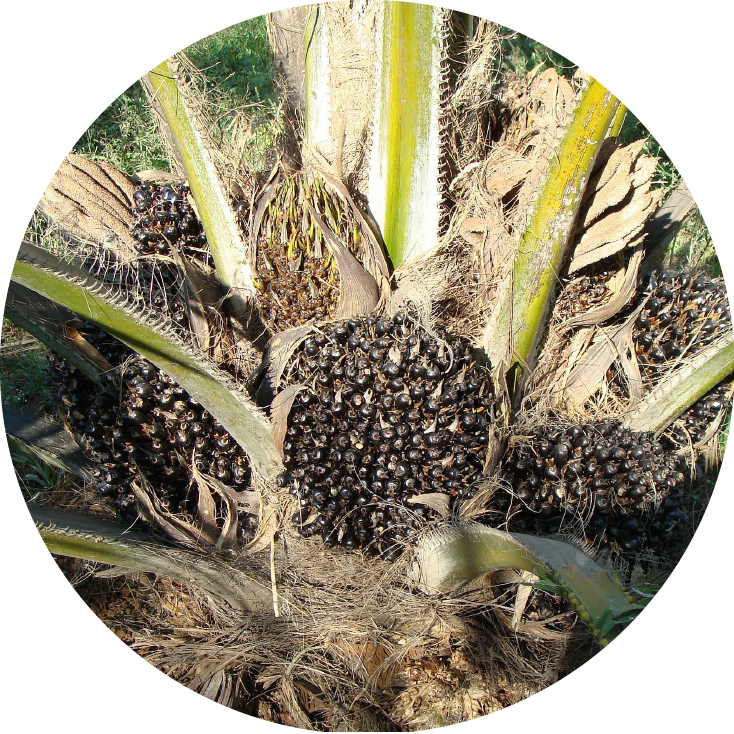