The American Palm Oil Council (APOC), funded by Malaysian government, is about to be relocated from Los Angeles to Washington D.C. “Apoc needs to be closer to the US lawmakers. We need to be in Washington D.C. to better engage with President Obama’s team and other policymakers,” said Plantation Industries and Commodities Minister Tan Sri Bernard Dompok. 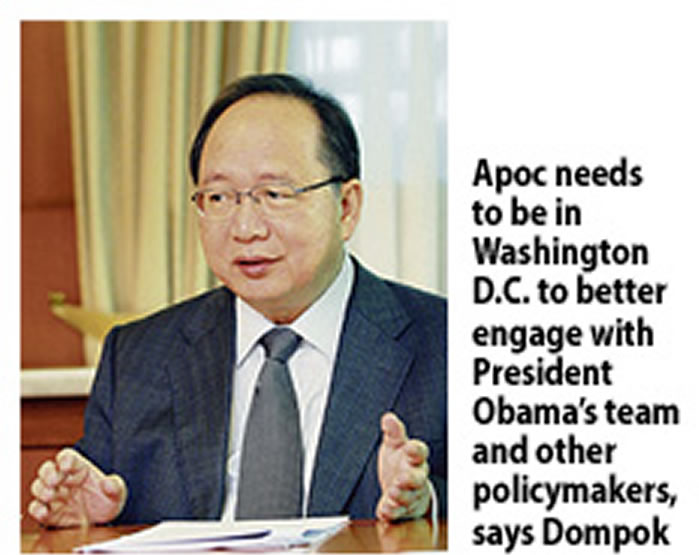 “Initially, Apoc was in Chicago. After a few years, we shifted to Los Angeles for better commercial presence. Now, we feel it is more strategic to be in Washington D.C. “Timely intelligence gathering and effective communication with the relevant decision makers in the US makes a lot difference to Malaysian palm oil suppliers and traders,” he said after officiating at the Palm Oil Refiners Association of Malaysia’s (Poram) annual dinner held in Kuala Lumpur recently.Dompok also said he will convey issues on palm oil market access to Minister of International Trade and Industry Datuk Mustapa Mohamed for consideration in the coming Free Trade Agreement (FTA) negotiation between Malaysia and the US.“I’ll be highlighting the need to do away with non-tariff trade barriers put up by the various US state policymakers against palm oil, natural rubber gloves and timber-based furniture.“So far, the Minnesota and Oregon state governments have legislated against palm oil usage in biodiesel production. We need to address these concerns in the FTA context between the US and Malaysia,” he said.