Be Prepared for Volatile Trading

OBSERVATIONS: The Kuala Lumpur CPO futures market ended 2009 with a bang on speculation that the drop in production of palm oil in December 2009 will outstrip the drop in export sales. The corollary is that end-December 2009 stocks will also be lower.

Much of last week’s upward thrust in price was due to short-covering, as evidenced by the notable contraction of the total number of open interest contracts to 81,268 contracts from the previous week’s 84,589 contracts. Although a bull run powered by short-covering could be viewed as suspect, what was of significance was the decisive breakout above the erstwhile RM2,625 a tonne overhead resistance level, signalling this market’s step-up to a higher price plane.

Market speculation is for December 2009 production to be lower by 14 per cent compared to the previous month, or by some 224,000 tonnes from Novermber 2009 output of 1.596 million tonnes. And for export sales to drop by some 13 per cent, or about 195,000 tonnes from November 2009 export sales of 1.5 million tonnes. The difference in the guesstimates between production and exports is about 30,000 tonnes, which should not make much of a difference to the still high level of stocks, save for a dramatic bulge in domestic demand. But you never know.

Market participants, however, will know for sure next week, when the Malaysian Palm Oil Board (MPOB) comes out with with its monthly report on December 2009 trade and end-2009 stocks data.

For the record, the local futures market’s benchmark third month forward contract gained RM968 or 57.11 per cent in 2009. The US soyabean futures market (the January 2010 contract settled end-2009 at 40.35 US cents a pound), by contrast, was up only by 189 points or 21.21 per cent, part of the reason why the discount of palm oil vis-à-vis soyabean oil dropped to as low as 10 per cent last week, from the norm of 15 per cent.

Conclusion: This market is likely to experience volatile trade ahead of next week’s MPOB report.

Although carry-forward upward momentum is likely to lift this market higher in early trade this week the volume complex and the open interest indicators do not suggest that the rally we saw in December 2009 is the stuff that real bull markets are made of.

In this regard caution should be the watchword as market players prepare to place their punts in this new year of 2010. 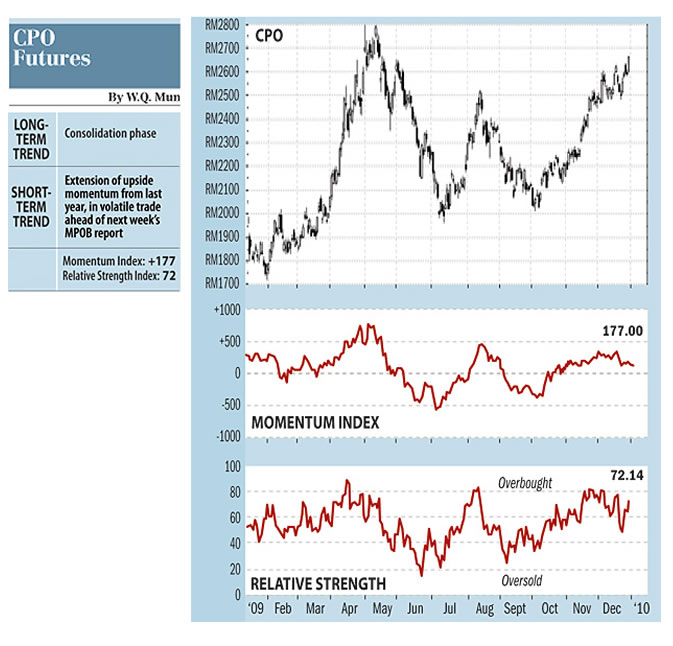 (c) Divergence between the index and price action on the chart is a very strong indication  that a market turning point is imminent.