The main reason for the price fillip was US dollar weakness against the euro, which encouraged speculation that the US export trade in soyabeans and soyaoil will benefit from higher foreign demand, mainly from China. That had a knock-on effect on the local CPO futures market, which otherwise would have been grasping at straws for leads. 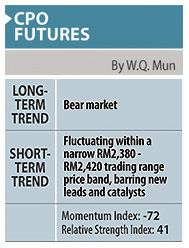 As a result of US dollar weakness, crude oil for August delivery jumped 6.07 per cent to US$78.26 a barrel and gold for August delivery 0.02 per cent to US$1,258.30 an ounce. And US soyabean oil for July delivery tacked on 102 points or 2.76 per cent to close last week at 37.92 US cents a pound.
The latest export estimates was a disappointment, considering that this market has in the past month been used to and expects news of strong export demand.

Export monitors Societe Generale de Surveillance’s and Intertek Agri Services’ June 1-15 export estimates averaged 604,623 tonnes, down 1,580 tonnes from that for the first half of May. By sharp contrast, the June 1-10 export estimates were a whopping 69,000 tonnes or 19.18 per cent above that for the similar period in May.

Conclusion: This market’s short-term trading range is now between RM2,380 and RM2,420 and, barring the appearance of new leads and market-inciting catalysts, should continue to fluctuate within that price band. 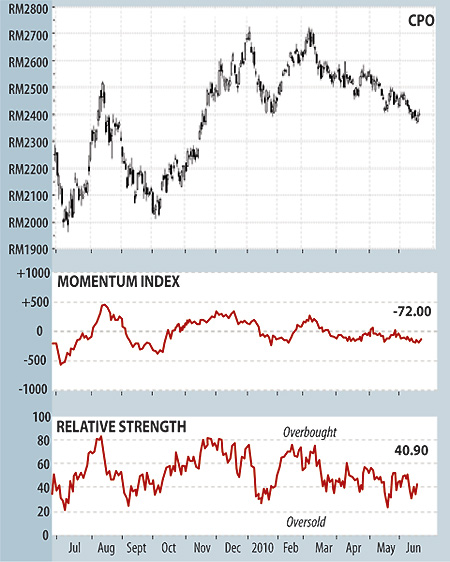 n THE RELATIVE STRENGTH INDEX: This indicator is most useful when plotted in conjunction with a daily bar chart and may be interpreted as follows:
(a) Overbought and oversold positions are indicated when the index goes above or below the upper and lower dotted lines.
(b) Support and resistance often show up clearly before becoming apparent on the bar chart.
(c) Divergence between the index and price action on the chart is a very strong indication that a market turning point is imminent.