CPO Futures – Weakness of US Dollar a Telling Factor

OBSERVATIONS: Saved by the dollar. Or rather the weakness of the US currency, which lifted world commodity markets overall, even the fundamentally weak ones like the local palm oil futures market.The Kuala Lumpur CPO futures market tumbled in early trade in the wake of the Malaysian Palm Oil Board’s (MPOB) report that, as a result of a record high production in October of 1,985,855 tonnes of palm oil, end-October 2009 stocks burgeoned to a 10-month high of 1,974,462 tonnes, way above market expectations of between 1.75 million to 1.80 million tonnes.The actively-traded January 2010 contract slid at first to a low of RM2,215 a tonne. But that was before the weak dollar came to the rescue, lifting it to a high of RM2,285. The contract settled last Friday of RM2268, eking out a RM22 or 0.98 per cent gain over the week.The actively-traded US soyabean oil futures December 2009 contract, by contrast, surged 184 points or 5.0 per cent to close at 38.61 US cents a pound. But it had a positive knock-on effect on the local market, saving the latter from falling into negative price territory.What the weakness of the US dollar did was give a boost to world asset price inflation. Gold surged to unprecedented highs above US$1,100 an ounce. World currencies, most notably the euro and the yen, surged against the dollar; and world equity markets also benefited. Crude oil was the notable loser; the Chicago Mercantile Exchange December 2009 oil futures fell US$1.08 to US$76.35 a barrel over the week, but that’s because there’s no shortage in supply of the black goo to meet world demand.Conclusion: This market now is held hostage by external factors, in particular the fate of the US dollar. The technicals – particularly the volume indicators – are still indicating that, if not for weakness in the US dollar and consequent bullishness in the bellwether US soyabean oil futures market, this market would not be near where it is now. 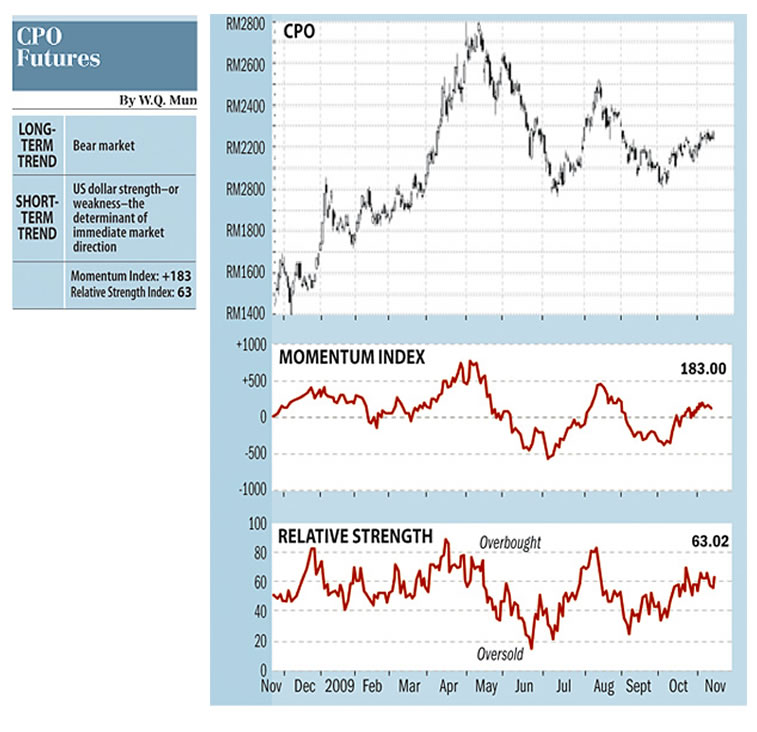 HOW TO USE THE CHARTS AND INDICATORSTHE BAR AND VOLUME CHART: This is the daily high, low and settlement prices of the most actively traded basis month of the crude palm oil futures contract. Basically, rising prices accompanied by rising volumes would indicate a bull market. THE MOMENTUM INDEX: This line plots the short/medium-term direction of the market and may be interpreted as follows:(a) The market is in an upward direction when the line closes above the neutral straight line and is in a downward direction when the reverse is the case.(b) A loss in the momentum of the line (divergence) when prices are still heading up or down normally indicates that the market could expect a technical correction or a reversal in the near future.THE RELATIVE STRENGTH INDEX: This indicator is most useful when plotted in conjunction with a daily bar chart and may be interpreted as follows:(a) Overbought and oversold positions are indicated when the index goes above or below the upper and lower dotted lines.(b) Support and resistance often show up clearly before becoming apparent on the bar chart.(c) Divergence between the index and price action on the chart is a very strong indication that a market turning point is imminent.The subject expressed above is based purely on technical analysis and opinions of the writer. It is not a solicitation to buy or sell.