The Federal Land Development Authority’s (Felda) wholly-owned subsidiary, Delima Oil Products Sdn Bhd, expects its revenue to rise 16 per cent to more than RM1.3 billion by 2013, riding on the growing diet of the country’s population and its export markets. 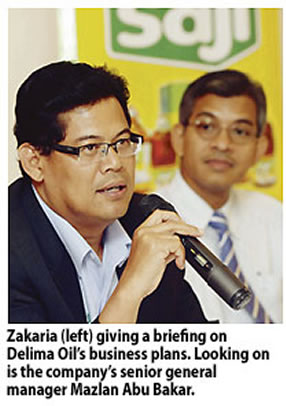 Delima chief executive officer Zakaria Arshad said that in the light of swelling demand, Felda planned to set up a packaging and distribution centre in Yangon, Myanmar, by May next year to cater for that country’s 50 million people.

“We will invest RM8 million in the packaging centre, which will also be our first distribution point overseas supplying 3,600 tonnes of cooking oil a month to the local population.

“We are in the process of identifying a site with a local joint-venture partner, with Felda owning a majority stake.

“Later, we may expand the centre and build our first refinery overseas,” Zakaria told reporters after a cooking oil demonstration at Felda’s headquarters in Kuala Lumpur yesterday.

Its products, under the brand name Saji for cooking oil and Seri Pelangi for margarine, are sold to bakeries, restaurants, factories, confectioneries as well as stores, supermarkets, hypermarkets and wholesalers. They contributed RM600 million and RM800 million revenue to the group in 2008 and 2009 respectively.

Felda’s cooking oil and margarine products are among the country’s top three, commanding 30 per cent market share. The group aims to grow the figure to 50 per cent in three years.

Zakaria said that for the Myanmar market, Felda will supply palm olein – the raw material to make cooking oil – from its estates in Johor.

He added that Delima’s strategies to increase market share include ramping up capacity at Felda’s sole refinery in Pasir Gudang, Johor, to 924,000 tonnes a year (combined capacity for refinery, fractionation and packing), introducing new products every year and beefing up advertising and promotion.