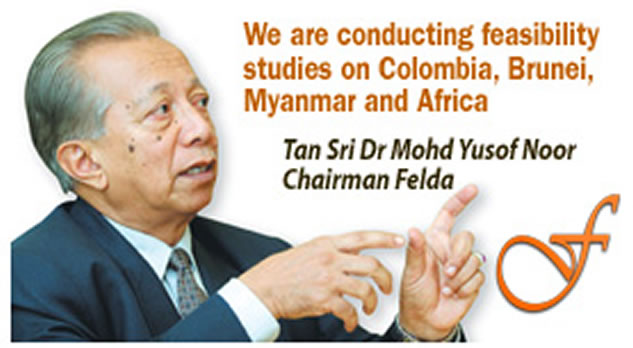 The government-owned agency has received offers from Colombia, Brunei, Myanmar and Africa to open estates in these countries

The Federal Land Development Authority (Felda), the world’s largest owner and manager of plantation land, is all set to open estates in more countries abroad as part of its plan to be a global player.

“We are conducting feasibility studies on each of these countries such as demand and supply, return on investment as well as the cost factor.

“It costs twice as much to open plantations in a developed country compared to a developing country,” Yusof told Business Times recently at Felda’s headquarters in Kuala Lumpur.

Felda has operations in seven countries, selling and processing crude or processed palm oil and its related products.

It has been approached before when in 2004 the West African state of Sierra Leone, Papua New Guinea, Timor Leste and most recently Brazil, asked for help with the planting of oil palm and plantation management.

As an example on how much investment is needed, Felda announced last week an allocation of RM91 million to replant 16 land schemes alone. Felda has a total of 317 land schemes nationwide.

“We are still studying all these offers and have not made any decisions yet because we need to make sure we get returns on all of these investments,” Yusof said.

An investment would be long term due to the nature of the business and it also needs to be sure of demand.

“So part of Felda’s strategy is to go into our traditional buyers such as China and India where we know there is demand for our palm oil and we start small by selling cooking oil.

“We also have to make sure our plantations back home can supply enough before we really expand overseas,” he said.

This is why Felda has yet to set up a refinery in Europe; traditionally, the West is unfriendly towards palm oil.

“That is why we start small by setting up marketing offices in France and Turkey. Later on, Turkey can be a very important gateway for Felda to enter Europe in a bigger way,” Yusof said.

As for Brazil, Felda has been invited to take a look at the country but before it can even start, the agency has been attacked by anti-palm oil campaigns by various quarters especially non-governmental organisations.

“So far, our expansion plan into Brazil has been postponed,” Yusof said.

On earnings this year, Yusof said Felda remains optimistic that it can match last year’s revenue of RM15 billion but also warned of a difficult year ahead.

“This is because we have yet to see the full impact of the El Nino but we also remain optimistic, judging from our encouraging first quarter results.”

The Felda Group, which has 40 wholly-or partly-owned subsidiaries as well as joint-venture firms, produces a fifth of the world’s crude palm oil output.

Out of the total land area, about half is owned by Felda’s more than 110,000 smallholders and their 1.5 million family members. Felda manages 317 land schemes nationwide and owns 72 oil palm mills and seven refineries. Source : Business Times by Zaidi Isham Ismail