Floods across large swaths of Southeast Asia are threatening the world’s supply of palm oil and rubber and sending prices surging.

With many major plantations under water and feared damaged, the expected shortfall in palm oil has sent prices rallying 10% in the past three weeks to hit a six-month high. Natural-rubber prices are up as much as 5.7% in the same period.

The floods are most pronounced in Malaysia, where they have killed more than a dozen people and displaced more than 200,000 others. Parts of Indonesia have been hit, too, because of a severe monsoon this year. The two countries are the world’s top producers of palm oil, used in wide array of products including lipsticks and biscuits. And while the damage is causing devastation for many farmers, sustained price gains could help some because the crop is a key source of income. 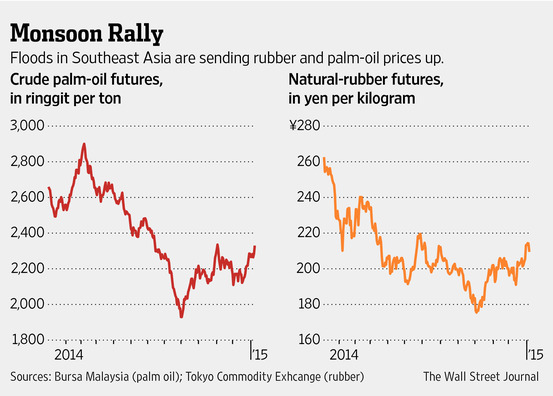 Brokers say investors are adding to bets that prices will rise further ahead of the Lunar New Year festivities next month, when demand for palm oil picks up for use as cooking oil in China, the world’s second largest buyer after India. The global palm oil market is valued at about US$50 billion

“Flood damage to palm-oil supplies in the current quarter is projected to be bad,” said Chandran Sinnasamy, who heads the trading desk at LT International Futures in Kuala Lumpur. He expects prices to retreat when floodwaters recede in the next few weeks.

Malaysian officials say output may have dropped 20% in December from a month earlier to 1.4 million tons, and forecast 20 millions tons of production for all of this year. That is lower than 21.25 million tons estimated by the U.S. Department of Agriculture in early December. Malaysia’s weather authorities are forecasting persistent thunderstorms and rain through Tuesday.

Prices of rubber are also jumping because of heavy rains and floods in the south of Thailand, the largest producer and exporter of the agricultural commodity, used primarily in tire manufacturing. More than two-thirds of the world’s supply comes from Thailand, Indonesia and Malaysia and the entire market is valued around $25 billion a year.

“Both commodities are in their low production season and now that there are floods, there are concerns about supply constraints,” said Singapore-based Rabobank analyst Pawan Kumar.

Luckchai Kittipol, chief executive of Thai Hua Rubber Public Co., a major Thai exporter of natural rubber with eight factories in the south of Thailand, said flooding has cut his supply from the region by half. The crunch may worsen amid already low stocks as many farmers have abandoned their trees after last year’s price crash.

Rubber prices fell 30% in 2014 because of a supply surplus, while the price of palm oil sank more than 20%. 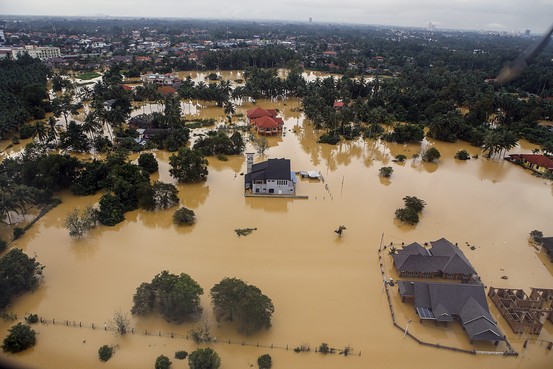 On Friday, benchmark crude palm-oil futures on the Bursa Malaysia Derivatives closed at 2,348 ringgit ($660) a metric ton, 2.8% higher than a week earlier and up 3.6% in the year to date. Benchmark natural rubber futures on the Tokyo Commodity Exchange settled at ¥206.5 ($1.74) a kilogram, 3.2% lower year-to-date after hitting a six-month high on Tuesday.

In Thailand, where rubber is a politically charged commodity because of farmers’ reliance on the crop, the government has in recent years tried to bolster prices through various measures such as subsidies and buying the commodity at above market rates, to no avail. Despite the recent increase, farmers in Thailand remain unhappy because prices are still down 60% from a record high in 2011, and they are threatening to demonstrate unless the government intervenes in the market.

Some investors, on the other hand, say prices may have risen too far. Singapore-based Michael Coleman, who co-manages the Merchant Commodity Fund, said the current optimism is hype. While there will be a short-term supply disruption, the rains will help both palm and rubber yields later this year, he said. The US$260 million fund trades both palm oil and rubber but has no positions in either commodity at the moment.

Analysts are wary of making bold calls. CIMB Research’s analyst Ivy Ng said in a note that the expected drop in palm-oil supply is likely to lift prices higher in the near-term, although worries about slower global growth and abundant supply of substitute products such as soybean oil could slow gains.

Rabobank’s Mr. Kumar said that palm fruits are still available, although harvesting and transport has been impeded by the flooding, so the real damage can only be assessed after the waters recede. Palm oil’s performance is also helped by the weak Malaysian ringgit, which will be integral to the performance of the oil this year, he said.

—Jason Ng contributed to this article.