MALAYSIA’S crude palm oil (CPO) prices are expected to stabilise between RM2,300 and RM2,700 a tonne next year, supported by steady global demand, lower supply and new advances in oleochemicals research. On Bursa Malaysia Derivatives Exchange, CPO prices currently hover between RM2,400 and RM2,500 a tonne. Malaysian Palm Oil Board (MPOB) chairman Datuk Sabri Ahmad said 2010 will be a good year for CPO prices as output is not expected to be as good as this year due to tree stress, pricey fertiliser as well as robust demand from the US. 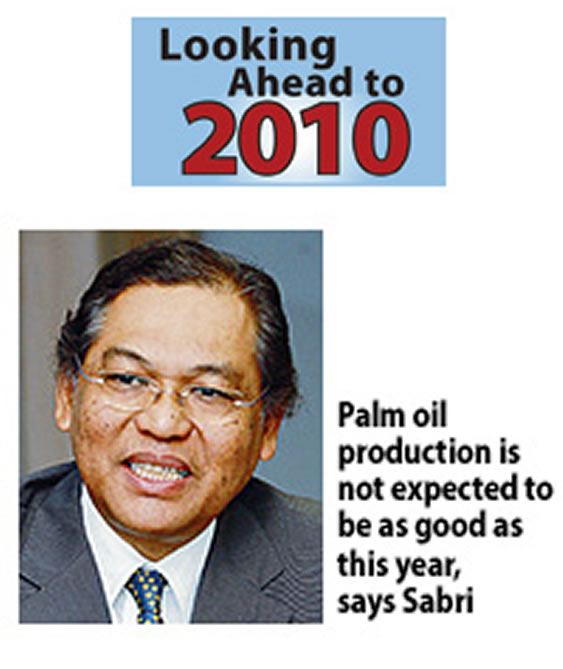 “Sabah and Sarawak is expected to endure heavy rain early next year which will cause delays in replanting efforts and fruit production is also expected to drop 20 per cent due to tree stress and this will be a boon to CPO prices,” said Sabri.

Palm oil production is expected to touch between 17 and 17.5 million tonnes this year compared with 17 million tonnes last year. Sabri said due to pricey fertilisers, palm trees will not get enough nutrients and this will cause production to drop. He thinks that CPO prices may hold between RM2,300 and RM2,700 throughout 2010. “Petrol prices are also expected to rise next year which may augur well for the more competitive oil palm-based biodiesel.” Meanwhile, Federal Land Development Authority chairman Tan Sri Dr Mohd Yusof Noor said CPO prices are expected to hover between RM2,300 and RM2,600 a tonne next year due to steady global demand and rising awareness of the commodity. “Based on market feedback and our research data on the ground, CPO prices may average at around RM2,300 a tonne throughout the year. “But it won’t reach the RM4,300-a-tonne historical high registered in March 2008,” said Mohd Yusof. MPOB’s Sabri said demand from the US market would also rise due to growing concerns of harmful transfats in food ingredients that have prompted food makers to find other fats alternative. Malaysian Palm Oil Council CEO Tan Sri Dr Yusof Basiron, meanwhile, urged smallholders to accelerate replanting efforts and re-engineer the biodiesel business and its implementation. “Low biodiesel demand, high CPO price are slowing biodiesel production and a lot of factories are not producing biodiesel. They can also add value to oil palm by extracting tocotrienols and carotenoid and re-engineer them further downstream,” he said. Source : Business Times
]]>