Malaysia’s palm oil shipment to Rotterdam Port, thegateway to Europe has fallen by an average of 12 per cent every year since 2006’s peak of 1.7 million tonnes.

This year, it is poised to shed another 30 per cent to 900,000 tonnes. At the Roundtable on Sustainable Palm Oil (RSPO) conference last month, environment activist Wetlands International called for an address of “the alarming emissions from forest and peat swamp areas’ conversion into oil palm plantations”. The Netherlands-based non-governmental organisation (NGO) alleged that “the continuous emissions caused by drainage of carbon rich tropical peatsoil in Indonesia and Malaysia are enormous.” At the end of the meeting, Wetlands lamented that its attempts to insert a Greenhouse Gas Emission criterion had been frustrated by members representing Indonesian and Malaysian oil palm planters. 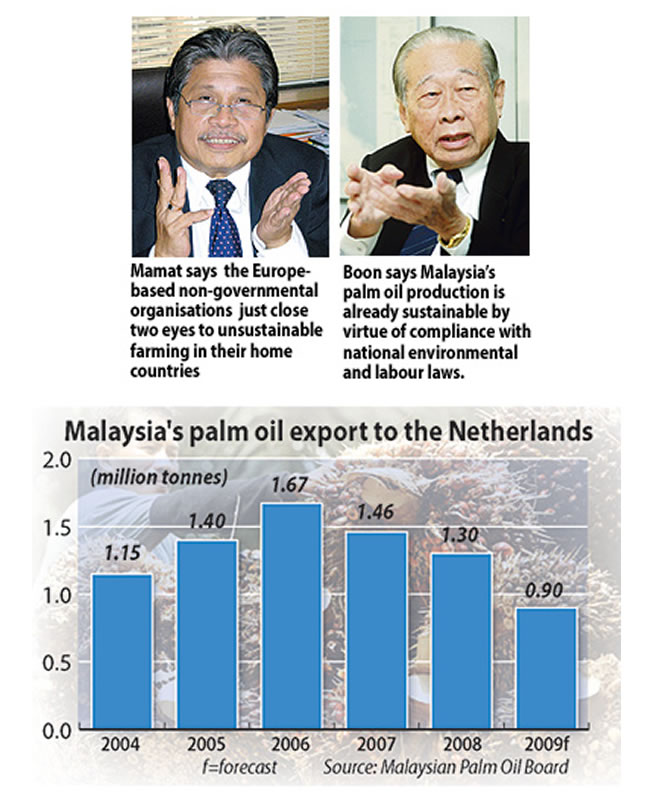 In an interview with Business Times, Malaysian Palm Oil Association chief executive Datuk Mamat Salleh shed light on the ulterior motive and double standards deployed by the NGOs to the detriment of the global palm oil industry. Under RSPO, palm oil has to be sustainably-produced. On the other hand, other vegetable oils like canola and soyaoil only need to be responsibly-produced. “Did you know that the term ‘responsibly-produced’ allows for genetically modified oilseeds?” Mamat questioned. Greenpeace, Friends of the Earth (FOE), and Wetlands International claim oil palm cultivation cause tropical deforestation. But these NGOs are silent on soyabean, rapeseed and sunflower farming causing deforestation in temperate countries. “How come these NGOs do not lobby for reforestation in Europe and the US? At the very least they should campaign for 10 per cent of the 100 million hectares planted with soyabean, rapeseed and sunflower to be with replanted with trees to absorb carbon dioxide from the polluted air there. “How come these NGOs do not tell their own governments to replant forest and restore the habitats for racoons, beavers, frogs, wild foxes, deers and bears?” Mamat posed more questions. The United Nations Copenhagen Climate Summit, scheduled to run from December 7 to 18, will see 192 countries meet to set targets on carbon emissions. As the summit draws near, Greenpeace and its affiliates have become more vociferous for a moratorium on the forest and peatland in Malaysia and Indonesia. Without providing scientific evidence that can be verified, these pressure groups claim oil palm planting on peatland pollutes the air to the extent that this agriculture activity makes Indonesia the world’s third biggest polluter, after the US and China. Surprisingly, there is no such call by these NGOs for a moratorium on cars, ships, airplanes, oil exploration, coal mining and petrochemical processing industries, which all emit more carbon dioxide to the air than agriculture. “Isn’t it ironic that the carbon emission of 3.5 tonnes from one tonne of depleting fossil fuel is tolerated while biofuels, which have the advantage of being renewable, are abhorred even though they are proven to be 35 to 65 per cent less polluting than fossil fuels?” Mamat asked. Human settlement, forest clearing, industrial revolution in developed countries have long emitted the large portion of greenhouse gas in the atmosphere now. “These Europe-based NGOs just close two eyes to unsustainable farming in their home countries. When we questioned their silence, they concede with their own governments’ view that it was their grandfathers’ right to clear-cut forest for industrialisation. “But what about our grandchildren’s rights to progress and prosperity?” Mamat asked. On the one hand, Malaysia and Indonesia face threats from Greenpeace, FOE and Wetlands activists who are skilful at propaganda to impose moratorium on tropical forest and peatland. On the other hand, global vegetable oils trade thrives best when markets open up for free competition and more respect is accorded to representative governance. When placed together – it doesn’t take a PhD in economics or political science to conclude that the true motive of these NGOs is to put up trade barriers against tropical nations’ palm oil to benefit rapeseed and sunflower farmers who are heavily subsidised by the EU government. In a separate interview, Malaysian Estate Owners Association (MEOA) president Boon Weng Siew explained how Malaysia’s small and mid-sized oil palm estates are already practising sustainable oil palm planting by virtue of compliance with the country’s environmental and labour laws. Established in 1931, MEOA represent 153 small and medium-sized estates of more than 40 hectares. All oil palm planters, whether smallholders or estate owners, comply to the Environmental Quality Act 1974 and the Environmental Impact Assessment Order 1987. “We prepare and submit EIA reports for agriculture land development covering an area of 500 hectares or more. Open burning of plant residue is prohibited,” he said. Apart from eco-friendly laws, oil palm planters observe the Employment Act, the Industrial Relations Act and the Minimum Standard of Housing and Amenities Act. Estate owners are not required, by law, to provide accommodation, schools, clinics and places of worship but many of MEOA members do so as part of their corporate social responsibilities. “However, when accommodation for workers is provided, the site and buildings must comply with the Minimum Standard of Housing and Amenities Act 1990. The clinic also has to comply with the Private Healthcare Facilities and Services Act 1998,” Boon said. To date, Malaysia’s oil palm plantations span across 4.5 million hectares. To a question on Greenpeace and FOE’s claim that monoculture oil palms are unable to support wildlife diversity, making the estates sterile, Boon replied, “That is not true. Shrubs, ferns, fungi and herbs, monkeys, birds, wild fowls, squirrels, rats and snakes flourish in oil palm plantations.” Plants, mammals, insects, reptiles and birds have adapted to the oil palm ecosystem. “Oil palm estates are the green lungs that generate oxygen which the developed part of the country breathes, fulfilling many of the rainforest functions,” he said. Boon also said planters today do not just plant, harvest and sell. “Oil palm planters are now more aware of the whole supply chain from the point of applying fertiliser to milling. We are also familiar with traceability, food safety, environmental and social responsibilities,” he said. “Malaysia’s palm oil production is already sustainable by virtue of compliance with national environmental and labour laws,” Boon added. Source : Business Times by Ooi Tee Ching
]]>
You can share this posts: