Malaysia’s third largest palm oil producer by hectarage Kuala Lumpur Kepong Bhd (KLK) said its fourth-quarter net profit declined by almost 9 per cent, mainly due to the lower selling price of crude palm oil (CPO). However, the company is optimistic that the current financial year ending September 30 2010 will improve and be “favourable”, mainly driven by higher oil palm fruit production and stronger earnings from its oleochemical division. “The plantations (division) will continue to contribute satisfactory returns, underpinned by expected higher fresh fruit bunches (FFB) production, (and we also expect) higher earnings from the oleochemical division in anticipation of improved demand from the recovery of the global economic crisis,” said KLK in its filing to Bursa Malaysia yesterday. Its retail division is also expected to regain lost momentum, with the completion of its restructuring exercise.
The company posted a fourth-quarter net profit of RM243.73 million, an 8.88 per cent fall against RM267.5 million a year ago. Revenue for the period fell by 16 per cent to RM1.8 billion, from RM2.15 billion a year ago. Like most palm oil producers, KLK earnings were hit by the lower CPO prices. The average prices of CPO for the fourth quarter ended September 30 was 24.7 per cent lower at RM2,410 against RM3,200 for the same period a year ago. Although fourth-quarter results were weaker than last year, KLK said that it could have been worse but the improved contribution from its oleochemical operations (from RM29 million to RM58.2 million) as well as write-back on its investments has helped mitigate the decline. 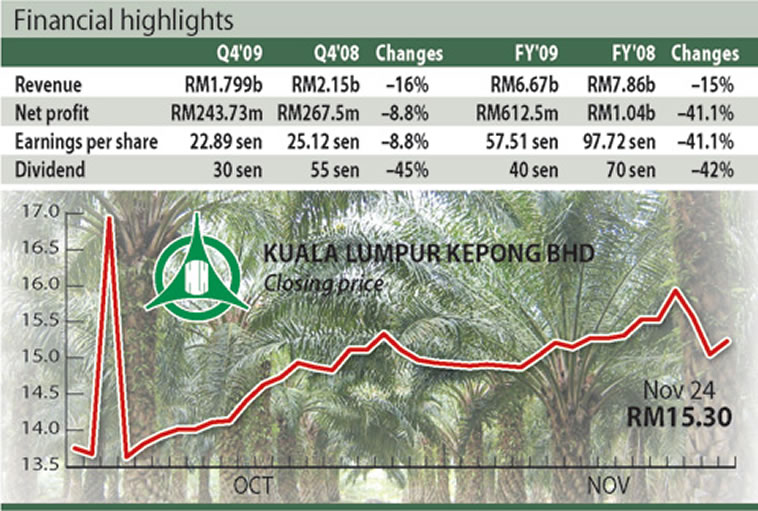 For the full fiscal year, it posted a net profit of RM612.5 million, against RM1.04 billion a year ago. Revenue fell to RM6.66 billion for the full-year ended September 30 2009. Analysts in general remained neutral and positive on the company’s stock. There are 12 research houses recommending a “buy” call, 12 placing a “hold” call, while five have a “sell” call on the stock. Target prices range as high as RM17.25 (Macquarie) to as low as RM8.22 (UBS), based on Bloomberg data. KLK also proposed to pay a final dividend of 30 sen to shareholders. In total, it plans to return a dividend of 40 sen a share to shareholders, representing more than two-third of its full-year net profit. Its shares on Bursa Malaysia closed 1.2 per cent higher at RM15.30 yesterday. So far this year, KLK shares have risen by more than 71 per cent. Source : Business Times
]]>