PETALING JAYA: Biodiesel production has slowed significantly since early this year as demand falls amid the economic slowdown and as the price of crude palm oil (CPO) continues to stay higher than that of crude oil.

“There’s no ideal CPO price amid the current crude oil price but it should be lower than crude oil,” an analyst with a local research house told StarBiz.

“CPO is currently trading at about US$100 higher than crude oil, giving lower margins to biodiesel producers,” he said, adding that the current CPO price was unlikely to fall back too much. 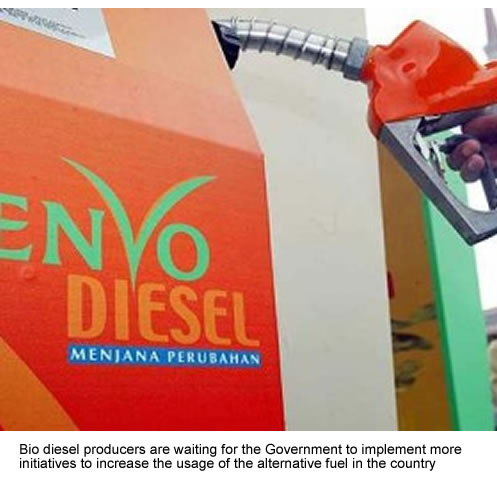 Due to the high volatility of crude oil and CPO prices, the outlook for the biodiesel industry remains “foggy”, according to the analyst.

“It (biodiesel) is a tricky business to be in, given that it needs two key commodities to be trading at a certain level relative to one another,” he said.

“There’s no visibility in the business; even producers can’t tell the outlook for biodiesel production due to the fluid price movement of these two commodities.”

Moreover, there were not many biodiesel players in Malaysia, noted another analyst.

As at Oct 31, 2008, the Government had approved 91 palm oil-based biofuel manufacturing licences with a total capacity of 10.2 million tonnes annually.

However, given the high feedstock prices, the analyst said only 10 palm-based biodiesel plants were in operation with a total capacity of 1.5 million tonnes a year.

Due to favourable market conditions last year, the production of biodiesel rose 32% to 171,700 tonnes from 129,715 tonnes in the previous year.

Meanwhile, biodiesel producers are still waiting for the Government to implement more initiatives to increase the usage of the alternative fuel in the country.

An industry player told StarBiz that although the implementation of the B5 biodiesel in the transport industry was already ongoing, it was limited to the Klang Valley.

B5 biodiesel is a blend of 5% processed palm oil and 95% diesel.

“We are actually struggling at this time even though there are still markets in Europe and the United States. We have the biodiesel plants but things are not really moving,” the industry player said.

“We hope the biodisel usage can be increased, not limited to the B5 programme alone but to other sectors too as we have ample resources for biodiesel in the country,” he said.

Source : The Star by Shannen Wong