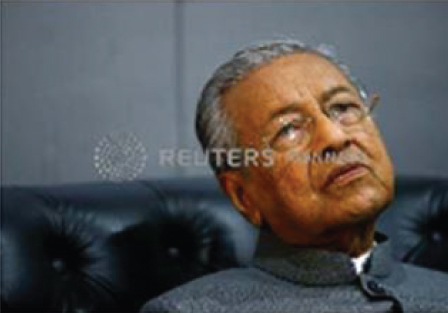 LANGKAWI: The European Union risks opening up a trade war with Malaysia over its “grossly unfair” policies aimed at reducing the use of palm oil, Prime Minister Mahathir Mohamad said on Thursday.

This month, the European Commission concluded that palm oil cultivation results in excessive deforestation and its use in transport fuel should be phased out by 2030.

Malaysia, the world’s second biggest palm oil producer after Indonesia, relies on the crop for billions of dollars in foreign exchange earnings and hundreds of thousands of jobs.

Mahathir, 93, said the EU’s increasingly hostile attitude towards palm oil, a commodity used in everything from chocolate spread to lipstick, was an attempt to protect alternatives that Europe produced itself, like rape seed oil.

“To do that kind of thing to win a trade war is unfair,” Mahathir told Reuters in an interview on Langkawi, a tropical resort island 30 km o Malaysia’s mainland.

“Trade wars are not something we like to promote but on the other hand it is grossly unfair for rich people to try and impoverish poor people.”

Mahathir, an architect of modern Malaysia and a trained physician, swept to power in a stunning election victory last year on a promise to revive a flagging economy and end the corruption that plagued the tenure of former leader Najib Razak.

Najib is facing numerous corruption charges over the alleged misuse of billions of dollars from Malaysian state fund 1Malaysia Development Berhad (1MDB), some of which was raised by U.S. investment bank Goldman Sachs through bond sales.

Najib is due in court next week in the first trial relating to 1MDB. He has pleaded not guilty and denies wrongdoing.

Goldman Sachs is facing charges in Kuala Lumpur over its role in helping raise $6.5 billion for 1MDB. Goldman denies wrongdoing and says officials under Najib’s administration lied to mislead its staff.

‘WHEN THE TIME COMES’

Mahathir, who was previously prime minister for 22 years from 1981 to 2003, said Goldman could only do business in Malaysia “if they pay us what we are asking for”, reiterating a figure of $7.5 billion given by the finance ministry.

“Because they were not prudent … they are supposed to study the borrowers and lenders properly,” he said, adding that he was willing to negotiate with the bank.

Mahathir said his government was also in talks with the U.S. Department of Justice over Goldman Sachs.

A Goldman Sachs spokesman said the bank deposited all of the net proceeds from the bond transactions into 1MDB bank accounts.

“Not a cent of those funds has ever passed through any accounts controlled by Goldman Sachs nor have any of those funds been subsequently moved or redirected under our authority,” he said in an emailed response to questions.

In an effort to reduce Malaysia’s debt after the 1MDB scandal, Mahathir is considering the listing or sale of stakes in state-owned enterprises, including Malaysia Airlines.

There has been speculation this could include selling a portion of Petronas, Malaysia’s national energy behemoth and the world’s third-biggest exporter of liquefied natural gas.

But Mahathir said this was not on the cards.

“It has always even given the government good returns. We have no plans to privatise or to sell Petronas,” he said.

There is daily speculation in Malaysia about when Mahathir, who is well into his nineties, will hand over power to one-time foe and former deputy prime minister, Anwar Ibrahim.

Mahathir, whose five-year term would end in 2023, had originally promised to cede control to Anwar in 2020.

“I will step down when the time comes … but we have not fixed a date,” he said.

“I promised I will not go up to five years. I stand by my promise.” – Reuters