NOVEMBER’S exports dipped unexpectedly by 3.3 per cent from a year ago, but economists are confident that Malaysia is still on the way to recovery although the road will be slightly bumpy. The market had expected a modest 2 per cent growth after October’s small gain. However, exports fell 7.7 per cent from October. CIMB Investment Bank chief economist Lee Heng Guie said the recovery of exports is well on track to achieve 8 to 10 per cent growth for the whole year. “The external sector has emerged from the worst, on the back of global recovery and improving prospects for the electrical and electronics (E&E) sector as well as commodity prices,” he said. Total trade for the month amounted to RM91.25 billion, a decrease of 0.9 per cent from a year ago. The International Trade and Industry Ministry (Miti), in releasing the data yesterday, said most sectors recorded a decline in exports in November, except for transport equipment, petroleum products, metalliferous ores and metal scrap as well as palm oil. 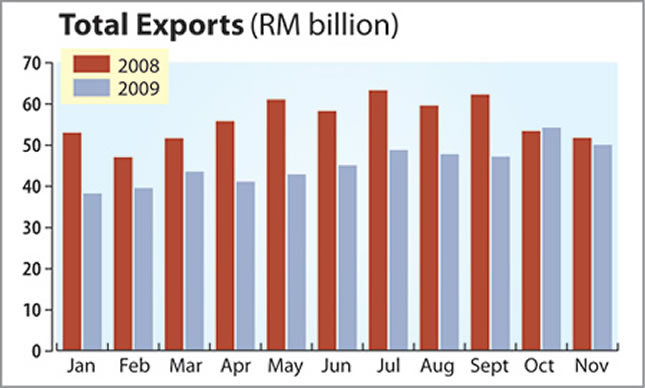 HSBC Bank senior Asian economist Robert Prior-Wandesforde also felt that the numbers were not that bad.
“In our view, the trend is up and will remain so over the course of 2010 as stronger regional/global domestic demand continues to translate into stronger trade flows,”
he added. However, Alvin Liew of Standard Chartered Bank said the contraction raises some concerns for the manufacturing sector, especially if the global recovery is sluggish this year. “When we look at the past exports data, Malaysia’s significant contraction rate (double-digit) started in December.
“So we can assume that the impact from a favourable base effect will be more material for exports from December 2009 onwards, and we certainly expect to see exports return to positive growth in next month’s data release.” Meanwhile, Miti said Singapore, China, the US, Japan and Thailand ranked as the top five export destinations, accounting for 54.3 per cent of Malaysia’s total exports. Exports to Asean, which accounted for 26 per cent of total exports in November, decreased compared to October due to lower exports of crude petroleum, E&E products, machinery, appliances and parts, manufactures of metal as well as iron and steel products. Miti also noted that although exports to China dipped in November compared to October, they surged by 52.9 per cent versus a year ago, unlike those to the the US and the European Union where exports decreased by 13.1 per cent and 9.5 per cent respectively. Total imports in November 2009 increased by 2.3 per cent to RM41.19 billion from November 2008, due mainly to higher imports of capital goods. Total trade during the first eleven months of 2009 was valued at RM890.99 billion, a decrease of 19.3 per cent from the corresponding period of 2008. Between January and November, exports declined by 19.2 per cent to RM498.62 billion, while imports were lower by 19.4 per cent to RM392.36 billion, resulting in a trade surplus of RM106.26 billion. Source : Business Times