Malaysia is still committed to selling biodiesel nationwide, despite delays in the plan and a high palm oil price.

The government had initially set January 1 as the deadline to sell B5 biodiesel, a mixture of 5 per cent palm oil and 95 per cent diesel at all petrol stations nationwide.

“We’re still looking to go for the full B5,” Plantation Industries and Commodities Minister Tan Sri Bernard Dompok told reporters after presenting his keynote address at a conference in Kuala Lumpur yesterday.
Once the government finalises the price of B5, the fuel will initially be sold in Selangor, Negeri Sembilan, Pahang and Johor.

This will happen this year, Dompok said, declining to give a specific date. 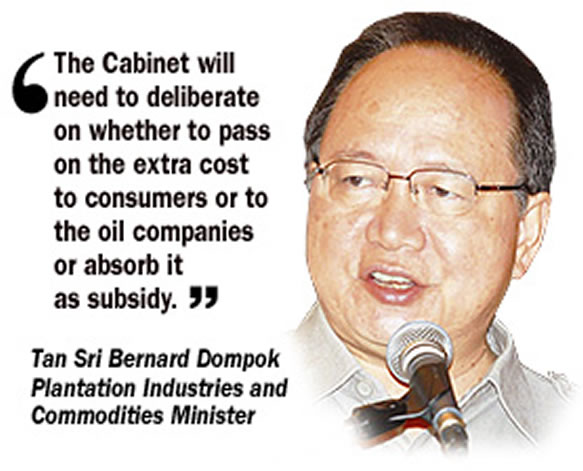 The Cabinet needs to decide if consumers will have to pay extra for B5. The fuel has an extra cost of four sen a litre, which is mainly the cost to transport and blend the mixture.

“That is in the Cabinet Paper that I’m preparing. The Cabinet will need to deliberate on whether to pass on the extra cost to diesel consumers or to the oil companies or absorb it as subsidy,” he said.

Currently, there are a handful of biodiesel plants in active operation. They are spread out in Pasir Gudang, Kuantan, Lumut and Lahad Datu.

These plants, which are built at seaports, are far away from towns and cities of high population. It costs extra money to transport biodiesel to the fuel depots to be blended with ordinary diesel.

Oil companies like Petroliam Nasional Bhd, Shell, Esso, Caltex and BHPetrol are positive on retailing biodiesel at the pumps, but when it comes to absorbing blending cost at all 36 fuel depots nationwide, they remain hesitant.

“If there was no consideration for subsidy, it would have been easier for the government to implement the B5 mandate,” Dompok said.

Four months ago, when palm oil prices were trading at around RM2,000 per tonne, the minister hinted that the government may reduce the biodiesel blend mandate to B3 to save on subsidies.

At that time, the subsidy for full implementation of B5 mandate was estimated to cost RM250 million a year.