Sabah produces over 30 per cent of the country’s palm oil and should be able to generate renewable energy from the crop’s waste, but initiatives to move into this direction must be policy driven. 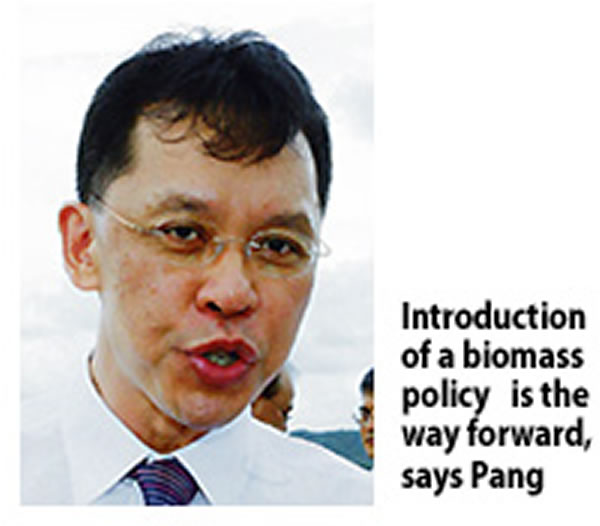 “The introduction of a biomass policy, driven by environmental considerations is the way forward in harnessing renewable energy from the oil palm industry.

“There is no doubt we should be able to generate renewable energy from palm oil mill effluent and empty fruit bunches, but it needs to be policy driven,” he said in a statement yesterday.

Of the 410 palm oil mills in Malaysia, 117 are in Sabah. Mills emit methane from retention ponds after oil extraction.

Methane or biogas can be trapped from the mill sludge to fuel steam turbines and generate power.

Pang said little of the oil palm biomass is being used for commercial purposes as selling empty fruit bunches is not a major part of a mill’s income, and neither is there a serious enforcement of law to compel them to dispose of the bunches, a major contributor of methane gas.

He cited the example of Eco Biomass Energy Sdn Bhd, a South Korean investor at the Lahad Datu Palm Oil Industrial Cluster that is facing difficulties in getting biomass for its proposed biomass power plant.

He said two years have passed and the company is still unable to secure sufficient long term supply of empty fruit bunches, despite Sabah producing almost a third of the nation’s palm oil.

POIC Sabah needs Eco Biomass Energy’s plant to produce power, which can be supplied to a myriad of palm oil-related industries.

Pang said a biomass policy will spell out government incentives and strict environmental requirements for the production of renewable energy.

“For example, the estimated RM6 million needed for mills to install biogas-capture structure – unless there are incentives or legislative requirement or both, not many mills will bother to capture their POME (palm oil mill effluent) gas,” he said.

At the moment, there are only four power plants in Sabah that are fuelled entirely on empty fruit bunches, both in raw and fibre form. Source: Business Times by Jaswinder Kaur