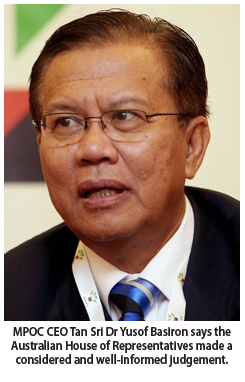 PETALING JAYA: The Malaysian Palm Oil Council (MPOC) yesterday lauded the move by a committee in the Australian House of Representatives to reject a proposed food labelling legislation that singled out palm oil.

MPOC chief executive officer Tan Sri Dr Yusof Basiron was pleased by the Economics Committee Report, which recognised the success and importance of the palm oil industry to Malaysia.

He urged the Australian Parliament to reject the anti-palm oil bill and support economic growth and poverty reduction in Malaysia, and reject unfounded environmental trade barriers.

The Food Standards Amendment (Truth in Labelling – Palm Oil) Bill 2010 was rejected by Australia’s House of Representatives Economics Committee on Monday, the second committee to do so since it was tabled in Parliament.

Malaysia sent two teams for the public hearings in April and August, appealing to the Australian legislators to consider the plight of the farmers with this form of indirect trade barrier.

The hearing chaired by the Community Affairs Legislative Committee was successful, but the Australian Senate chose to proceed and brought it to the House of Representatives.

Malaysia recently completed a high-level ministerial, parliamentary and industry visit to Australia, led by Plantation Industries and Commodities Minister Tan Sri Bernard Dompok, to Victoria and New South Wales to address the many misconceptions being spread about the palm oil industry.

Yusof was pleased that both the majority and minority reports from the Australian House of Representatives Standing Committee on Economics made a “considered and well-informed” judgement and has also strongly opposed any trade barriers on misguided environmental grounds.

“The joint and collaborative efforts of the Malaysian government and palm oil industry have aided in ensuring that the Australian House of Representatives Committee was given the facts on palm oil – not misinformation from environmental non-government organisations with an anti-palm oil agenda,” he said in a statement yesterday.

“Once again, when the claims of the environmental NGOs are put to the test, they are found to be erroneous.”

The Economics Committee Report represents an important step towards the rejection of the Truth in Labelling – Palm Oil Bill by the Australian Parliament.

The matter now rests with the Australian Federal House of Representatives and whether the government and Liberal/National Party will vote against the Bill in the Parliament.