Kuala Lumpur: Malaysian palm oil yield can be accelerated if incentives are given to drive research and development activities, said the Malaysia Palm Oil Council (MPOC).

“The Malaysian palm oil industry has not been increasing productivity for the past 30 years.

“I am proposing to the Government to consider some ideas and innovation that may solve this problem,” he told the media after a public lecture entitled “Palm oil industry tranformation: Techno-ecological economic perspective”. 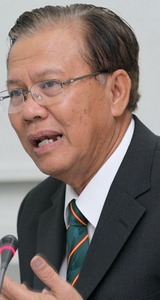 Yusof: ‘The Malaysian palm oil industry has not been increasing productivity for the past 30 years.’

However, he declined to disclose further details on the plan as he has not presented it to the Government.

In response to a timeframe and targeted improvement, he said:

“The sky is the limit as technology has no limit.”

He drew an example of his invention, a continuous milling system that speeds up the process of refining palm oil.

CP Industrial Product Holding Bhd took license of the invention and recorded a revenue of RM500mil per year.

“The company is able to build one and a half mills per month. They are perfecting the whole system and their product is in demand,” he added.

Palm oil is a major export earner among primary commodities, contributing RM80.4bil in revenue in 2011, which translated to 11% of export earnings for the country.

Yusof said palm oil has replaced soy oil as the preferred edible oil due to its nutritional values.

This is because the United States’ import of palm oil had increased from 250,000 to more than one million tonnes in the past ten years.

Through researches, it was found that palm oil has identical nutritional values compared with olive oil.

He also said the world’s growing dependence on palm oil would continue as its production will increase over those of soy, rapeseed and sunflower oils.