Various NGOs and conservation groups have been vocal against the Malaysian palm oil industry, criticizing it cultivation and management practices as being responsible for extensive biodiversity and wildlife losses. While the impact of human wildlife conflict cannot be brushed aside due to population growth and expansion of arable land for agricultural use, MPOC had always argued that this industry should not be held solely responsible for such conflicts and losses. Indeed we had argued that many sectors of the industry have always adopted good management practices and contributed extensively towards conservation efforts that ensures the survival of endangered and other wildlife species. As a further proof of our efforts MPOC set up the industry sponsored Malaysian palm oil wildlife conservation fund (MPOWCF) with an injection of RM20 million and successfully used these resources to further wildlife conservation throughout Malaysia.

While these had generated positive outcomes, MPOC has not been spared the continuous stream of criticisms from the NGOs. They even went so far as to criticize  several well meaning conservation groups for accepting funding from MPOCWF in order to do good and much needed conservation programs on the ground. Often these were conducted in collaboration with the palm oil industry. Most vocal among these NGOs was a barrage of abuse from Nature Alert through its spokesperson Sean Whyte. In a long running episode Sean Whyte had blatantly accused the industry of ordering the killing of orang utans. Nature Alert further polarized the debate by suggesting that in Sabah alone 300 orang utans had disappeared and no actions were taken by the authorities there. We had always maintained that these were sensationalized lies aimed at further belittling palm oil and creating an adverse consumer perception towards this food commodity. Already we see significant misinformation about palm oil and the damage this is capable of creating in the marketplace.

This week, utterly fed up with these unsubstantiated accusations, the NGOs in Sabah retaliated through a joint consultation and press release. Each of these organizations had toiled many years in Sabah to ensure wildlife conservation and they have always been the most vocal against any misdeeds towards any wildlife in the state. Further these conservation groups are internationally recognized for their work in Sabah. The fact that they would unanimously debunk Sean Whyte’s false claims of the wonton killing of orang utans by the palm oil industry and the 300 missing animals is testimony that certain NGOs would go to any extend to discredit the palm oil industry. This is just one example of the lies and misdeeds Nature Alert and its allies have perpetuated against palm oil. There are many other equally false and damaging accusations that remain hot topics. We wonder what new fantasies will be fabricated by the likes of Nature Alert in their efforts to discredit palm oil.

At our end, MPOC will continue to work with well balanced and well meaning NGOs to create a harmony between wildlife conservation and the palm oil industry. Several programs have already been initiated. Among these are the proposed Borneo Elephant Wildlife Sanctuary, the on-going Wildlife Rescue Unit and several program to ensure the long term survival of orang utan in the states of Sabah and Sarawak. Testimony to these efforts was the recent fact finding visit by the Minister of Plantation Industries and Commodities, Malaysia, Tan Sri Bernard Dompok to conservation sites in Kinabatangan and his open engagement and dialogue with leading NGOs in Sabah. Resulting from these there are emerging efforts to better understand and manage riparian reserves and eventually create a wildlife corridor to reduce human wildlife conflict.

All these efforts are indeed testimonial towards our seriousness and commitments towards wildlife and biodiversity conservation. We remain open in our willingness to work with NGO communities for the overall betterment of  all concerned. It is indeed timely that NGOs accept reality and team up with us and other conservation groups so that harmonious outcomes are achieved for the overall betterment of wildlife and biodiversity conservation in Malaysia.

Following several statements and allegations published in the press and on the internet, accusing Sabah Wildlife Department of accepting “massive” sums of money from the oil palm industry while closing their eyes on illegal killings of orangutans, its Director, Dr. Laurentius Ambu, would like to respond: “Sabah has always been proactive in its task to monitor wildlife and to enforce laws against wildlife poachers and killers. “The illegal killing of critically endangered species such as orangutans has become a rarity in Sabah. We would be more than happy to work hand in hand with organizations such as TRAFFIC and hope that they would share any evidence regarding poaching or even Trade of orangutans in Sabah. We will definitely take action and prosecute the culprits,” added Laurentius. “We do acknowledge the fact that poaching of other wildlife such as pangolins and porcupines that end up in the Chinese market in China is a real problem and we are working very closely with the Royal Malaysian Police, Malaysian Maritime Enforcement Agency and Malaysian Customs to end this traffic,” concluded Laurentius.

On the other issue raised by a non-governmental organization based in the United Kingdom, Nature Alert, about the “300 orangutans that have been allegedly killed over the past 8 years in the Lower Kinabatangan Wildlife Sanctuary (LKWS) due to the expansion of oil palm plantations”, Dr. Laurentius said: “There is no such killing of orangutans purportedly due to the expansion of oil palm industry. The fact that the LKWS has been totally protected since 2002 and that the total sanctuary area of 25,000 hectares has remained unchanged is direct testimony to the falsehood of this baseless allegation”. Dr Marc Ancrenaz of HUTAN, a French-based NGO working in Sabah for the past 12 years, has been monitoring orangutan populations throughout LWKS and concluded that “the reduction of orangutans in LKWS was not due to poaching or illegal killings”. He noted that “the idea that 300 orangutans were killed or poached by people whether from the oil palm plantations or by hunters is preposterous!”. “Through one of our first projects that HUTAN initiated, we have trained more than 50 villagers and they are now permanently monitoring wildlife activities in the LKWS. If 300 orangutans had been illegally killed in oil palm plantations, we would know it!,” concluded Ancrenaz.

SABAH WILDLIFE DEPARTMENT’S WILDLIFE RESCUE UNIT SUCCESFULLY RESCUED THIS YOUNG FEMALE ORANGUTAN FROM AN AREA EARMARKED FOR CLEARING. THISORANGUTAN HAS SINCE BEEN TRANSLOCATED TO A FULLY PROTECTED FOREST RESERVE

To give some light on this matter, Dr. Benoit Goossens, conservation geneticist from Cardiff University and Senior Advisor to the Sabah Wildlife Department explains: “In 2010, we published the results of a population viability analysis on the orangutan population in the LKWS. Using current genetic data gathered in the population, we modeled the probability of extinction of orangutans in the different forest fragments, taking into account the possibility of inbreeding depression. In less than 250 years, 60% of the forest fragments would lose their orangutan populations if there were no intervention such as translocation and corridor establishment.” “While there is no doubt that the oil palm industry is responsible for forest loss and habitat fragmentation in the LKWS, one cannot say that 300 orangutans have been murdered in the LKWS and blame the Sabah Wildlife Department for not prosecuting the killers. What we are observing in the LKWS is a natural process due to high fragmentation and isolation of small populations of orangutans. What need to be done is restoring connectivity between these populations, and protect the remaining forests,” concluded Goossens. 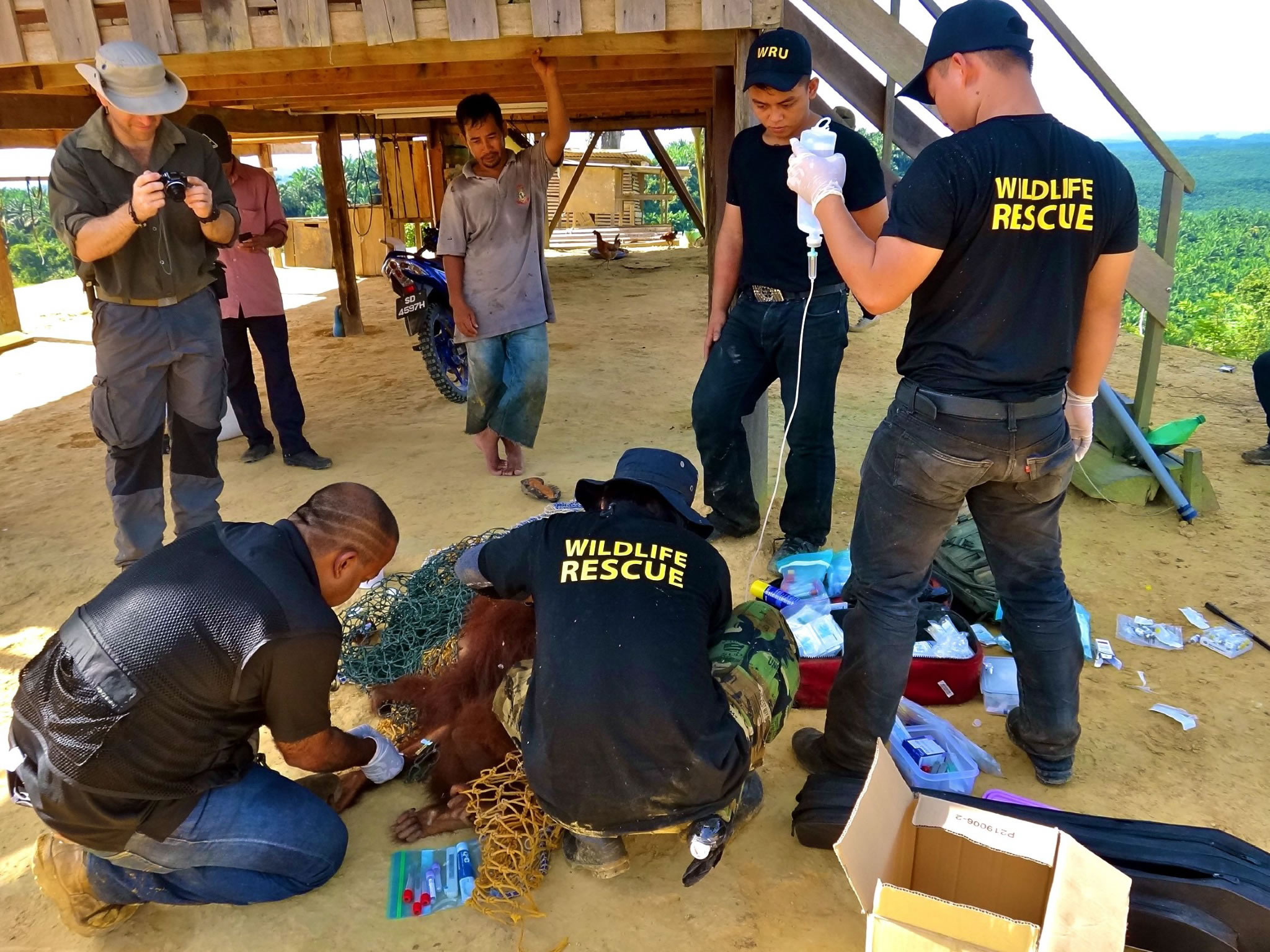 Datuk Dr Haji John Payne, Executive Director of Borneo Rhino Alliance when asked to comment noted that “The deliberate killing of orangutans is no longer a significant issue of concern in Sabah. The last cases of which I am aware date from more than ten years ago. Of greater concern is that land-owners in Sabah continue to clear forest where orang-utans occur and then plant oil palms. Typically, they bought the land cheaply from Sabahans in the1980s and 90s. Conditions of land title force the land owners to convert forest to oil palm. And land prices are now typically about 20– 30 times more than what was paid all those years ago, so it is difficult for government to acquire back those lands. The land owners clearing orang-utan habitat tend not to be members of the Roundtable on Sustainable Palm Oil, so we cannot penalise them through that route. I suggest that government tackles orang-utan conservation on private lands by sorting out how to address these points”

Mr.Wong Siew Te CEO of the Borneo Sun Bear Conservation Centers also adds “Without the active involvement of the Sabah Wildlife Department and the Sabah Forestry department the Borneo Sunbear Conservation Center would not be a reality. The centre aims to conserve sun bear through a holistic approach of improving animal welfare of the rescued sun bears at BSBCC, education, research and rehabilitation of the rescued sun bears. In fact SWD has been actively involves in confiscation of illegal pet sun bears in Sabah and sent to and care by BSBCC”. 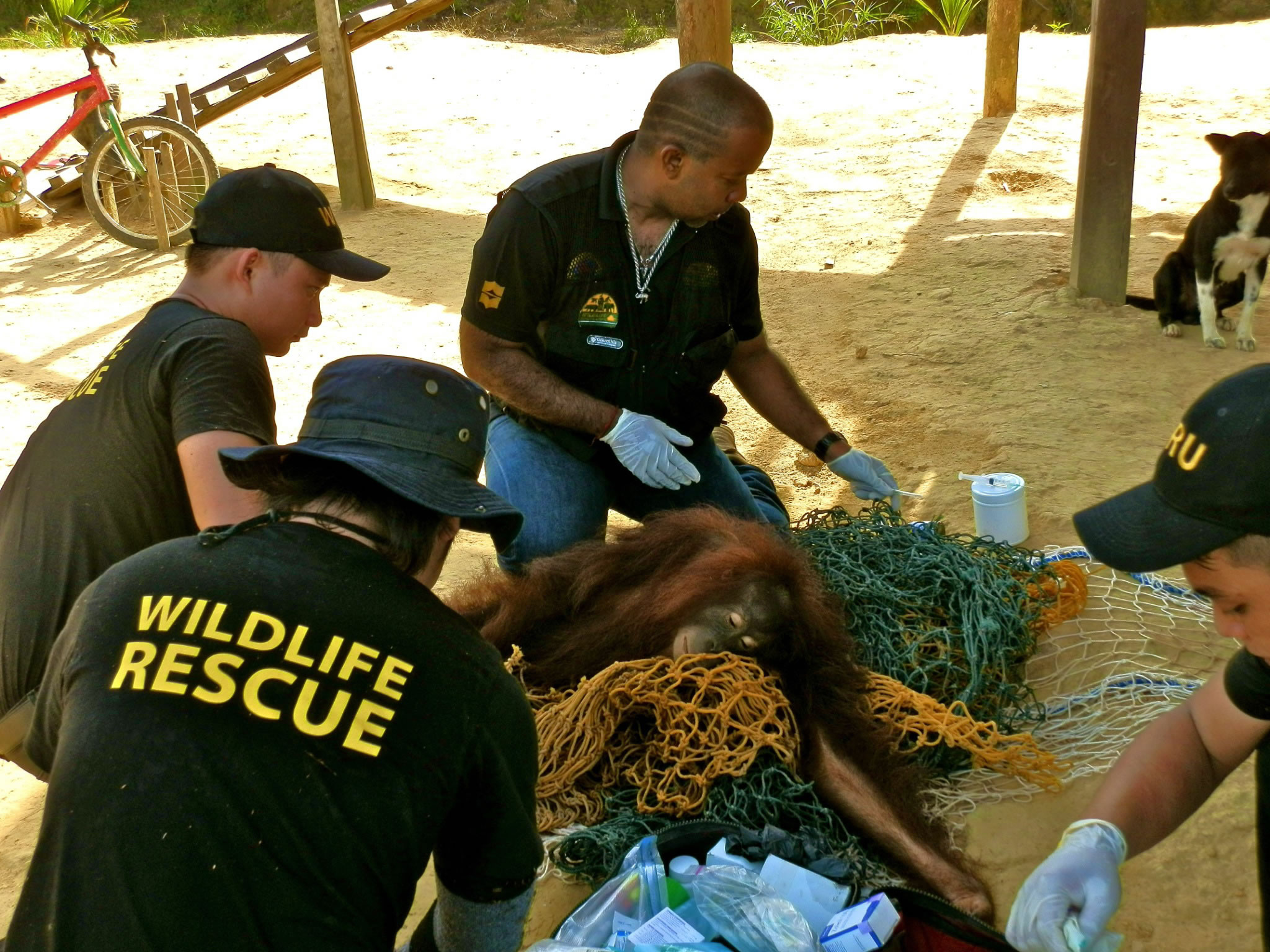 SABAH WILDLIFE DEPARTMENT’S WILDLIFE RESCUE UNIT SUCCESFULLY RESCUED THIS YOUNG FEMALE ORANGUTAN FROM AN AREA EARMARKED FOR CLEARING. THIS ORANGUTAN HAS SINCE BEEN TRANSLOCATED TO A FULLY PROTECTED FOREST RESERVE

Dr. Sen Nathan, Senior Field Veterinarian for the Sabah Wildlife Department stated that “the allegation of hundreds of orangutans being killed by oil palm expansion in Sabah and the lack of wildlife conservation activities in the state is far away from the truth”. “The Sabah Wildlife Department, since 1991, has rescued and translocated more than 400 orangutans from areas earmarked for agricultural conversion to protected forest reserves. Rescue and translocation such as this has become a rarity. Recently, SWD rescued and translocated two orangutans after more than a year without such activity. The owners of a small plot of land contacted SWD via HUTAN and asked to assist them to rescue these orangutans before they start clearing their land. The awareness of conservation of orangutans is already seeping into the public”. “We strongly advise our critics to come to Sabah and realise by themselves how much Sabah Wildlife Department and partners are doing towards wildlife conservation in Sabah “, suggested
Nathan. “To me, western NGOs such as the likes of Nature Alert that peddles half truths about the lack of Conservation in Malaysia or the lies of wanton killings of Orangutans in Sabah is likened to promote environmental neo colonialism. In fact I have personally invited this NGO to come and see for themselves of what Sabah is doing but they do not seem interested. I find this startling that since they seem to have Orangutan conservation in their mind” “Rather then to constantly blackwashing the conservation efforts of Orangutan in Sabah why not work together as I do believe our ultimate goal is to save this species ” concluded Dr.Sen.