SINGAPORE: Palm oil gained to more than RM3,000 a tonne for the first time since July 31, 2008, on speculation that supplies may lag behind surging demand from China and India.

The January-delivery contract rose as much as 1.2% to RM3,021 on the Malaysia Derivatives Exchange and was at RM2,999 at the 12:30pm break in Kuala Lumpur.

The world’s most-consumed edible oil has rallied 32% from this year’s low in July, on a combination of weather-related production concerns and substitution demand because of a lower-than-forecast global soybean crop.

“Demand for agri-commodities is likely to outstrip supply in the wake of strong emerging-market demand,” said Tanuj Shori, an analyst at Nomura Singapore Ltd. 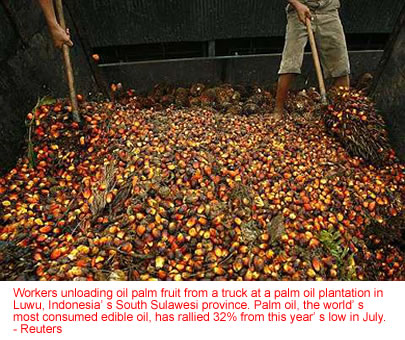 “A tighter global vegetable oils outlook, a stronger crude oil price and a weaker US dollar point to higher crude palm oil prices for next year,” the report said.

China’s economy grew 9.6% in the third quarter, beating forecasts, as inflation accelerated in September to a 23-month high, the statistics bureau said yesterday. China raised key interest rates three days ago for the first time since 2007.

India, the top buyer of vegetable oils after China, may import a record quantity of soybean and palm oils for a fourth year as a growing population and rising incomes spurred demand for processed foods, Ashok Sethia, president of the Solvent Extractors’ Association of India, said on Sept 21.

An oils trader for almost three decades, Mistry correctly forecast in March that prices would rise to more than RM3,000 after June. He said it may rise as high as RM3,200 on global oilseed supply concerns.

Palm oil was used in cooking and fuel applications, and was sensitive to crude oil price movements, James Fry, managing director of LMC International, said on Wednesday in a speech at a conference in Kuala Lumpur.

Crude oil surged 2.9% on Wednesday to US$81.77 a barrel, lifting commodities on concern that a weakening dollar would fan inflation. It last traded 0.2% higher at US$81.92.

The gain widened the discount palm oil trades to soybean oil to as much as US$112.34 a tonne, from an average of $100.48 a tonne last week and US$83 last month, according to Bloomberg data.

When soybean oil widened its premium over palm oil, price-sensitive markets such as China and India reacted quickly to the changes, Fry said.

CME Group Inc’s January palm oil contract, pegged to the Malaysian benchmark price, gained as much as 1.3% to US$967.25 a tonne, the highest since the contract started trading in May.