Pullback Likely But Not A Bear CPO Futures Market

OBSERVATIONS: The Kuala Lumpur CPO futures market is likely to beat a retreat in early trade this week – for two reasons. The first is that, having risen to a 15-week high of RM2,521 a tonne last week, this market is high up in technical overbought territory and is ripe for a correction. The actively-traded February 2010 contract settled last Thursday (the market was closed last Friday for the Aidiladha festival) at RM2,482, up RM63 or 2.60 per cent over the week. The second reason is that, having been closed last Friday for the Aidiladha holiday, this market was unable to react to the fallout from the crisis of confidence resulting from the Dubai sovereign debt deferment (many analysts call it a default). It will have to play catch-up (or catch-down?) with the falls in world equities and commodities markets overall. The Dubai government, through Dubai World, reportedly owes US$59 billion (US$1 = RM3.38) and has asked its creditors for a six-month deferment in repayment. But there’s no guarantee repayment will be forthcoming even after the six months is up.

If the present crisis of confidence is confined to the Gulf region, it could blow over and turn out to be a storm in a teacup. But if it escalates into a major sovereign default problem, which would then resonate across global emerging markets in the same way that Argentina did in the early 2000s or Russia in the late 1990s, then world equity and commodity markets will feel the pain. There’s no telling now how the present debacle will pan out. So, market players may well heed this market maxim: when in doubt stay out. Which could halt the present short-term palm oil futures bull run in its tracks. Conclusion: RM2,340 is the immediate short-term support level and this market has quite a long way to fall from last week’s closing price of RM2,482 before it can technically be classified as having turned into a short-term bear. HOW TO USE THE CHARTS AND INDICATORS THE BAR AND VOLUME CHART: This is the daily high, low and settlement prices of the most actively traded basis month of the crude palm oil futures contract. Basically, rising prices accompanied by rising volumes would indicate a bull market. THE MOMENTUM INDEX: This line plots the short/medium-term direction of the market and may be interpreted as follows: (a) The market is in an upward direction when the line closes above the neutral straight line and is in a downward direction when the reverse is the case.
(b) A loss in the momentum of the line (divergence) when prices are still heading up or down normally indicates that the market could expect a technical correction or a reversal in the near future. THE RELATIVE STRENGTH INDEX: This indicator is most useful when plotted in conjunction with a daily bar chart and may be interpreted as follows:
(a) Overbought and oversold positions are indicated when the index goes above or below the upper and lower dotted lines.
(b) Support and resistance often show up clearly before becoming apparent on the bar chart.
(c) Divergence between the index and price action on the chart
is a very strong indication that a market turning point is imminent. The subject expressed above is based purely on technical analysis and opinions of the writer. It is not a solicitation to buy or sell. 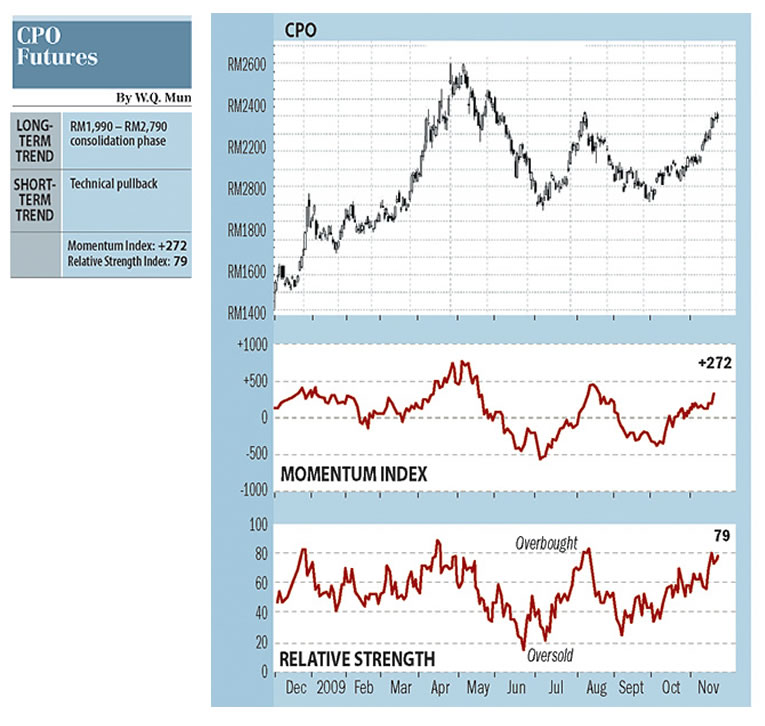