With one month left in 2020, the import performance of Malaysian palm oil by the countries in the Sub-Saharan Africa region is quite remarkable compared to the same period last year. Total imported volume has increased by 35.85% to reach 2.436 million MT. Kenya is the top importer of MPO from the region with a 119.84 % increase from just 187.479 MT last year to 412,152 MT so far this year. The surge in MPO imports in Kenya and other countries in the region especially CPO/CPL imports can be attributed to several factors.  For most countries, the import duty for processed palm oil is much higher than that of CPO/CPL. Therefore, these countries opt to import CPO/CPL instead of processed palm oil especially for countries that have large refining capacity.

From the data available, Indonesia has not been able to export CPO to the African countries as much in the previous years as Indonesia has to fulfil its domestic requirement especially to meet biodiesel mandate, and also to cater for demand from other CPO importing countries such as from India and EU countries. Despite the rise in CPO export prices in the last few months, Malaysian CPO/CPL is still attractive to African buyers since the Malaysian government gives 100% exemption on crude palm oil export duty. All these factors led to the substantial rise in Malaysian CPO/CPL by Kenya, Nigeria, Mozambique, and Ghana.

Since the increase of the CPO import duty by Tanzania last year, the significant role of Kenya as an East African regional palm oil hub has grown. Malaysian palm oil imported to Kenya is also rerouted to neighbouring landlocked countries such as Uganda, Rwanda, and Burundi.

Nigeria, despite being the largest producer of palm oil in West Africa with an estimated palm oil production of 1.22 million MT last year, still requires to import palm oil from Malaysia, Indonesia, and her neighbouring countries. MPO import to Nigeria has increased by 23.46% to 309,866 MT, mostly in the form of CPO/CPL.  The situation is also similar to Ghana where palm oil import has increased by 48.86% to reach 225,552 MT. Most of Ghana’s MPO import is in the form of CPO/CPL (74.7%).

Other countries in the region that have shown a considerable increase in MPO include Mozambique and Togo. Besides fulfilling its domestic requirement part of Mozambique palm oil import is also rerouted to neighbouring countries such as Malawi, Zimbabwe, and Zambia.  Togo MPO imports increased by 115.26 % to 161.386 MT. Part of MPO import by Togo is also channelled to the neighbouring countries such as Nigeria, Niger, Burkina Faso, and Senegal.

Another country that shows an increase in MPO import is Madagascar. Most Malaysian palm oil imports from Madagascar is in the form of CPO/CPL which has grown from 136,225 MT to 64,952 MT during the Jan-Nov 2020 period. The increase in MPO import can also be attributed to growing domestic demand driven by changing tastes and the growth in the food processing industry.

Few countries in the region that have reduced their imports of MPO are Angola, Benin, and Guinea. The lower import of MPO by Angola can be attributed to the reducing purchasing power that has resulted from the drop of crude petroleum price, which Angolan is the second-largest producer in Sub-Saharan Africa. The tightening of the Nigerian border can be blamed for the drop in Benin palm oil import as most of Benin’s import is intended for the Nigerian market. Guinea palm oil demand has contracted due to deceleration in economic activity due to the impact of social distancing measures. The COVID-19 pandemic has dampened the Guinea growth outlook and the service sector is expected to contract because of declining hotel, restaurant, and transport activities. 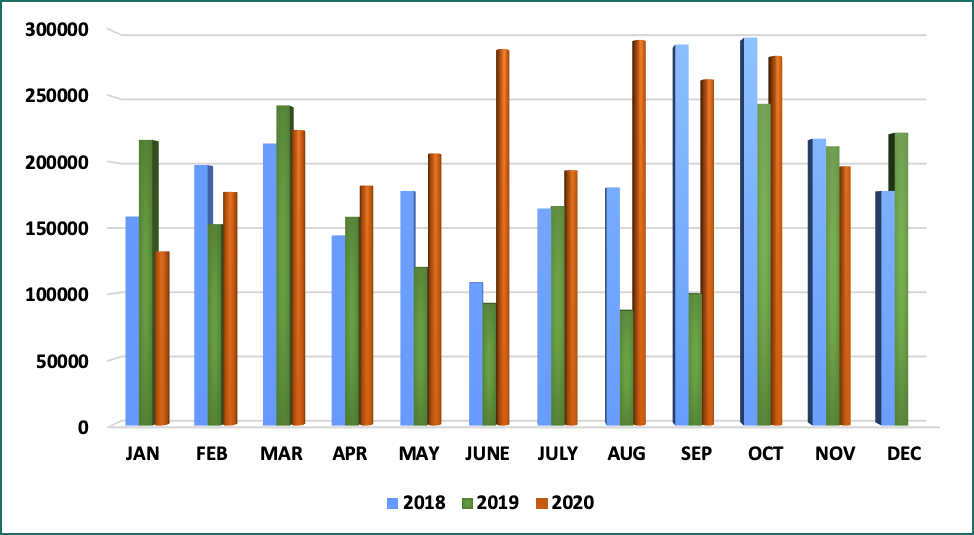 For the final month of this year, the region is expected to import around 200,000 – 220,000 MT of MPO, which will bring the total import of MPO in the year 2020 to 2.635 – 2.650 million MT.  CPO/CPL will continue to be the main palm oil products imported from Malaysia. In view of the resumption of export duty in January 2021, some of the importers might rush to import more Malaysian CPO this month to take advantage of exemption on export duty before the new export duty takes effect.