From January to July 2021, Malaysian palm oil export to the Asia Pacific region decreased by 381,509 MT or by 22.3% compared to the last year. Most of the countries recorded a drop in Malaysian palm oil imports for the period under review.  Revision in Indonesian export taxes and levies has increased Indonesia’s price competitiveness in refined palm oil products export. This will likely result in a scenario where there will be a higher demand for PPO from Indonesia and major CPO-consuming countries will look to Malaysia for supplies. Asia Pacific countries are mostly the PPO importers which resulted in the increase of Indonesian palm oil intake in most Asia Pacific countries.

Singapore was the three import destination within the ASEAN region which recorded a decline of 120,504 MT or 54.6% to 86,772 MT from January to July 2021 as compared to the same period of last year. In early 2020, Singapore imported a large quantity of CPO for their biodiesel blending as taking advantage of Malaysia’s duty exemption on CPO. From January to July 2020, Singapore imported 56,713 MT of CPO, however, this year, there was no CPO imported due to the high palm oil price.

Malaysian palm oil exports to Vietnam have registered a decline of 108,169 MT or 36.9% to 184,896 MT compared to the same period in 2020, mainly due to an increase in palm oil import from Indonesia and high import of soybeans from the USA. From January to June 2021, Indonesian palm oil increased by 95,000 MT or 47% to 297,000 MT compared to the same period last year Besides the increase in the Indonesian palm oil import in Vietnam, the country experienced high availability of soybean oil in the market due to an increase in soybean domestic crushing for catering the domestic feed requirements. The recovery from the 2019 ASF outbreak increases the import of soybean into Vietnam which is away affected palm oil import. Also, due to the COVID-19 restriction, there are widespread closures of restaurants, hotels and canteens that have reduced palm oil consumption in the country. As a result, consumers prefer to stay at home and do home cooking. This trend shift has resulted in a growth in soybean oil and rice bran oil consumption in Vietnam.

The decline in imports of Malaysian palm oil by Japan was mainly due to lower imports of RBD palm stearin import which Japan mainly uses as feedstock for FIT-supported powerplants. The utilization of RBD palm stearin is dependent on global palm stearin’s prices and this is reflected in lower consumption due to the high price of RBD palm stearin especially during the first half of 2021. As a result, the import of RBD palm stearin from Malaysia dropped by 29,198 MT or 81.9% to only 6,432 MT compared to the same period in 2020. Furthermore, Japan has not been spared from the Covid-19 pandemic and the country extended the state of emergency until 12 September 2021 due to the third wave of COVID-19 infections in the country. The Japanese government program to support domestic tourism has also been suspended, which negatively impacts HORECA sector sales. 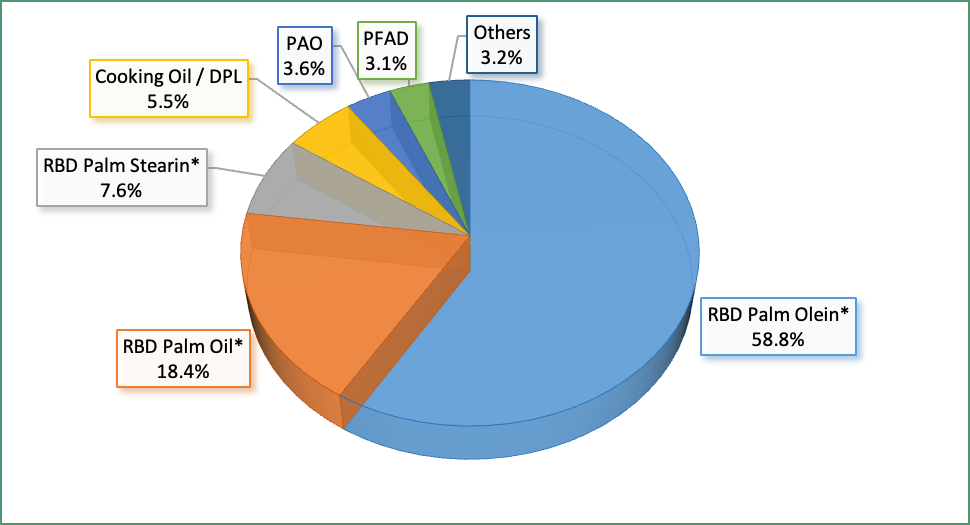