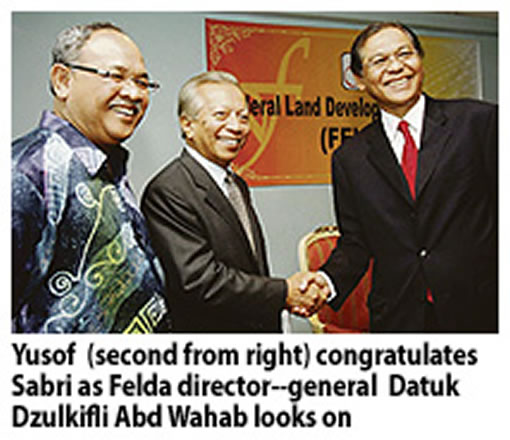 Felda Global Ventures is the inter-national and domestic business arm of state-owned Felda, which has operations in more than 20 countries.

Felda chairman Tan Sri Mohd Yusof Noor said the board of directors agreed to the appointment yesterday and had chosen Sabri on account of his more than 20 years experience, competency and knowledge of the oil palm industry in and outside of Malaysia.

“We have interviewed many, many people to find the suitable candidate. We informed him (Sabri) a few days ago and he agreed to it,” Yusof told reporters at Felda’s headquarters in Kuala Lumpur yesterday.

He said the appointment, effective yesterday and with a contract period of two years, has received the consent of Prime Minister Datuk Seri Najib Razak.

Sabri, meanwhile, noted that Felda was a mature 53-year-old organisation with a strong foundation and said he would continue to implement its policies and the various ongoing and future projects.

“Felda is the country’s success story, with many other countries wanting to emulate it. I will try to improve Felda’s current system to implement projects,” said Sabri, an agricultural scientist by training.

Sabri also served Golden Hope Plantations Bhd for 20 years where he was group CEO between 2004 and 2007 before it was merged with Sime Darby in 2006. He was instrumental in propelling Golden Hope towards a revenue of RM4.6 billion in the financial year ended June 30 2007, the highest-ever in its 160-year history.

Sabri pushed for Golden Hope’s expansion overseas, bolstered biodiesel usage, ramped up sales of downstream products and intensified research and development activities. He holds a masters degree in agriculture economics from the University of London in the UK and an advanced diploma in international studies from University of Rhode Island in the US.

Felda is the world’s largest unlisted plantation owner and manager with over 853,313ha of oil palm estates and other crops as at 2007, of which 90 per cent are planted with oil palm trees. About half of Felda’s land is owned by its 110,000 smallholders and their 1.5 million family members.

Felda, set up in July 1956, manages 317 land schemes and owns 72 oil palm mills and seven refineries. Its revenue of some RM15 billion a year is contributed by some 40 subsidiaries and associate companies. They produce a fifth of the world’s crude palm oil.