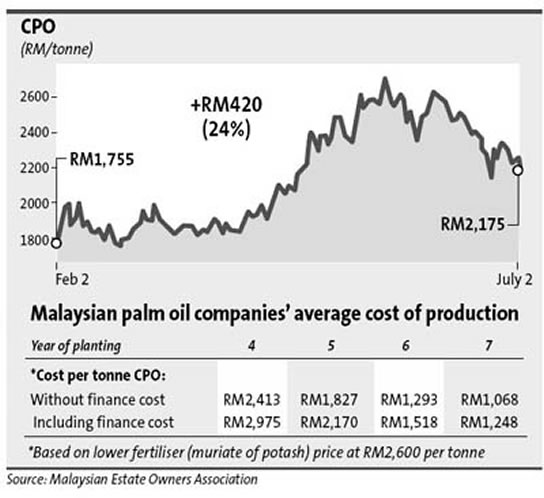 PETALING JAYA: The average cost of production (COP) among local oil palm companies in the first half of 2009 looked stable at RM1,100 to RM1,200 per tonne for efficient planters while new and smaller planters surpassed RM1,900 a tonne. (The COP covers the upkeep or cultivation, fertiliser application, harvesting, transportation, other estate charges and labour cost.) Industry consultant MR Chandran told StarBiz that oil planters’ average COP so far had not increased drastically as fertiliser prices, which account for about 60% of most planters’ total COP, had come down to about 12%. The price of muriate of potash – the most popular fertiliser among planters – was now traded lower at RM2,600 per tonne from RM3,000 in November last year, said Malaysian Estate Owners Association (MEOA) president Boon Weng Siew. With the crude palm oil (CPO) still trading above RM2,000 per tonne on the back of average COP at RM1,200 per tonne, Chandran said: “Efficient planters will continue to reap good gross profit margin at about RM800 per tonne of CPO.” He expects efficient planters like IOI Corp Bhd, United Plantations Bhd and Kuala Lumpur Kepong Bhd – which produced 25 to 30 tonnes of fresh fruit bunches (FFB) per ha per year – to continue to perform well this year. However, Chandran said strict sales tax – 7.5% imposed in Sabah whenever CPO price exceeded RM1,000 per tonne and 2.5% in Sarawak’s when CPO prices are at between RM1,000 and RM1,500 per tonne – would continue to erode the margins of oil palm planters in east Malaysia. Boon said the current production costs of Sarawak and Sabah planters were 26% and 15% higher respectively than their peninsula peers. “This (higher COP among east Malaysian planters) is mainly due to higher prices of input, cost of recruiting foreign workers, transport costs and freight charges, in the form of discounts in the purchase price of CPO by palm oil refineries due to poor port facilities, and higher state sales tax,” he added. The current COP in Sarawak is estimated at RM1,920 per tonne for a plantation with an average yield of 20 tonnes of FFB per ha per year or four tonnes of CPO per ha per year. Boon also said that Sarawak oil palm planters’ COP was higher than Sabah due to poorer productivity per unit area although sales tax being lower (5%) in Sarawak when CPO price exceeded RM1,500 per tonne and 2.5% when the price was between RM1,000 and RM1,500 per tonne. Meanwhile, CPO prices year-to-date in mid-May had peaked at RM2,880 per tonne to the current level of about RM2,200 per tonne. Chandran said the US Department of Agriculture estimate of soybean planted area for 2009 at a record high of 31 million ha, up 2% year-on-year, could ease the shortage in soybean and “will be negative on CPO prices.” Source : The Star by Hanim Adnan