The latest apprehension of the coronavirus is fast spreading across the world. The virus better known as Covid-19 is rapidly becoming an economic pandemic and the outbreak has since resulted in the drying up of palm oil demand particularly in China, where the outbreak first originated. This will certainly put pressure on the commodity trading in other parts of the world including other major palm oil buyers such as the countries in the sub-continent region.

As a result of the fear over the spreading virus and governments’ instruction to restrain people from going out, demand for palm oil may slow as people are not going out to eat anymore. Food take-out and delivery may still continue but many people are also aware of the risk that comes with the preparation of the take-away food, thus opting for home cooking. In general, cooking at home would require less oils as compared to preparing dishes at restaurants.

The oils and fats trade in Pakistan did not have any impact in the first two months of 2020 as the country was spared from the outbreak of Covid-19 pandemic. The first confirmed case of Covid-19 in Pakistan was reported on February 26 and the cases remained below 10 till the March 8.  Since then, the cases have spiked very rapidly and as of the morning of March 20, the total confirmed cases have exceeded 453 with 2 reported deaths.

Since there were no apparent restrictions in movement and trade, the trade volumes of oils and fats showed no major change. At the end of February, the imports of oils and fats in Pakistan registered a volume of 534,350 MT which is 1,554 MT or 0.29% lower when compared with the same period of 2019.  This minor decline in the imports was attributed to the high stocks at local ports which has led to a congestion at liquid cargo jetty at the port. At the end of February 2020, the edible oil stocks at Port Qasim Authority (PQA) and Karachi Port Trust (KPT) have recorded a figure of 420,470 MT which is 10.47% higher than the closing stocks of the previous month. The local wholesale market in Pakistan is currently selling cargo at a discount over international prices and this has slowed down the lifting of the cargo from bulking stations. This trend has caused major delays as it has been reported that 4-5 ships are currently waiting at the sea to discharge their cargo at the jetty.

Considering that Pakistan is heavily reliant on the import of edible oil to meet its monthly requirements, it is anticipated that the recently implement partial lockdown in the country will not have a major impact on edible oil trade. Malaysian palm oil share and export volumes have increased significantly in Pakistan. At the end of February, the total exports Malaysian palm oil to Pakistan was recorded at 217,712 MT (source: MPOB) which is 37% higher when compared with the same period of last year.

On March 17, Bangladesh reported its first Covid-19 related death. As of March 19, 17 people in Bangladesh have tested positive for Covid-19. The Bangladesh government is planning a lockdown in areas such as Madaripur and Faridpur which are deemed risky if the outbreak worsens. The Health Ministry has reported that around 5,000 people have been kept in quarantine as part of the ongoing effort to prevent the virus from prevailing. However, according to the Ministry again, Bangladesh is still in a better position than many countries in the world in terms of infection rate of the virus.

Due to this reason, palm oil import into Bangladesh, is yet to be affected by the pandemic. Significant exports of Malaysian palm oil to Bangladesh has been recorded at 22,790 MT during the Jan-Feb 2020 period from only 1,743 MT that was recorded during the same period of last year. This represents an increase of 1,207.5% (source: MPOB). The import pattern of palm oil in Bangladesh has been on the upward trend since November 2019 and looks set to continue for the next few months as importers stocking up on the commodity in anticipation of increased demand to prepare food for the upcoming Ramadan. Ramadan is scheduled to start on 23-24 April 2020.

For March 2020, it is expected that about 175,000 tonnes of RBD olein will be imported, while CDSBO would be 40,000 tonnes. Import quantity of RBD Olein was 2.7% higher during Jan-Feb 2020 period compared to corresponding period of 2019, while import of CDSBO was 29.05% lower. The ensuing Ramadan coupled with the conducive weather will be the driving factors behind the increased demand of palm oil in the domestic market. However, the market must be alert as panic buying symptom has emerged in the wholesale market and if such buying continues, palm oil prices may be driven upward. Currently, palm oil prices is still in bearish trend.

As the world’s top vegetable oil importer, India, would be mostly affected if supply of palm oil is disrupted by the ongoing Covid-19 pandemic. A Mumbai-based vegetable oil broker stated that India had less than a month’s supply. The country consumes about 1.9 million tonnes of edible oil a month and has 1.5 million tonnes at ports and in the pipeline according to traders. On an average, India would import about 1.25 million tonnes a month and the balance made up with domestic production. As of March 20, India has reported 5 deaths and total number of confirmed cases has climbed to 198.

As part of precautionary measures due to Covid-19 virus, stringent port controls at all Indian ports have been reported in the country since last week. The restrictions are reportedly affecting vessels that are coming from China, Thailand, Hong Kong, Singapore, Japan, Iran, Nepal, Italy, South Korea, Vietnam, Indonesia and  Malaysia. According to the reports, Port Health Organisation (PHO) will be screening all documents and allow the vessels berthing if they are satisfied with the documents provided, or otherwise the vessels will be further investigated by the PHO specialist and the process could take up to 14 days. Upon reporting, each vessel’s master has to send a report to port official as well as PHO Doctor including details on body temperature of each crew and last travelling details. Crews from China will warrant special investigation. Upon berthing, PHO Doctor will re-check the crew’s body temperature and do some testing before allowing to discharge. While the restriction has been passed, it has been observed that so far no problem has been reported an vessels are reportedly berthing.

In addition, India has almost stopped issuing fresh licenses for the refined palm olein starting from 19th February 2020. It is rumoured that about 300,000 MT of refined palm olein licenses were already issued and they stand valid to date. It is not known how many official and actual total licenses issued for refined palm oil. About 125,000 MT licenses have also been reportedly issued for Nepal. The issuance of license however has been stopped for the last 10 days due to COVID-19 issues and imports are reportedly not happening.

India is also heavily relying on imports of vegetable oil especially palm oil, however, during the Jan-Feb 2020 period, palm oil exports from Malaysia registered only 68,006 MT, a decrease of 699,332 MT or 91.1% from 767,338 MT which was registered during the same period of 2019. Continuous decline of MPO export to India since the beginning of 2020 is mainly due to the current restrictions on import of refined palm oil imposed by the Government of India (GOI). Since then, Indian buyers have reportedly been purchasing palm oil from Indonesia despite having to pay premium prices.

As for now, the much-feared Covid-19 is unlikely to affect demand of palm oil into the major consuming countries in the Sub-Continent region as palm oil is a crucial component in the food sector. It is too soon to conclude that Covid-19 will significantly dampen the demand of palm oil in the Sub-Continent region as the consumption growth has proven to be rising continuously and uninterrupted despite a few major outbreaks occurring in the world in the past 20 years. 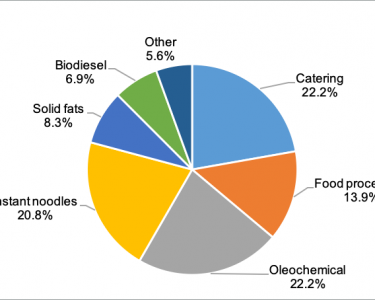 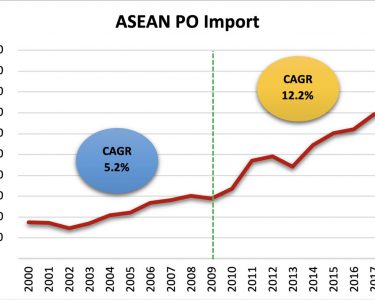 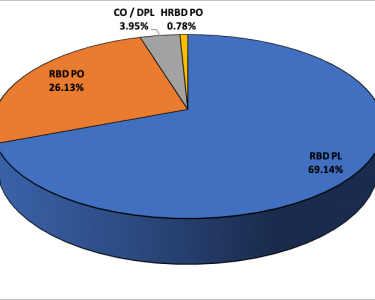