PETALING JAYA: Divergent views on crude palm oil (CPO) price forecasts ranging from RM2,250 to RM4,100 per tonne this year, amid uncertainties in crude oil prices and changes in biodiesel mandates, will compel planters to be more vigilant in their operations.

“One challenge basically is to continue paying windfall profit tax (WPT) by Sarawak planters who still have yet to get good harvest given their young palm trees with low yields,” said a Sarawak-based planter on the sidelines of POC 2011. 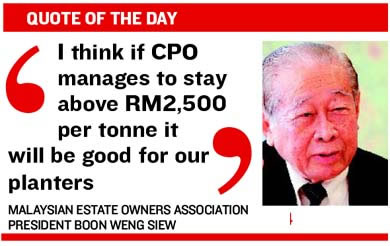 “We also have to fork out extra investments from planting on peatland and infrastructure works,” the planter said.

Malaysian Estate Owners Association president Boon Weng Siew, meanwhile, said the price forecasts at POC 2011 were still bullish despite some experts predicting the CPO would hit a low of RM2,250 to RM2,500 per tonne in the second half of this year due to the recovery in production among major producers.

“Personally I think if CPO manages to stay above RM2,500 per tonne it will be good for our planters,” Boon said. “They will have nothing to worry about for the rest of the year.” 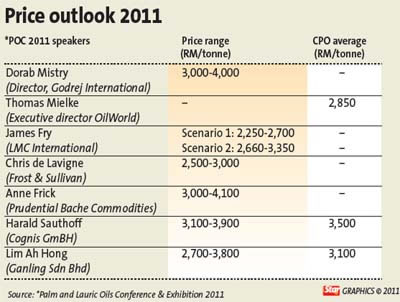 He is also concerned about the threat of changing biodiesel mandates by legislators, particularly in Europe, as well as the new technology coming onstream in the next three to five years, in terms of making “celulosic ethanol” which is much more cost effective, thus affecting the high price cycle and pushing prices down.

UOBKayHian in its plantation sector report yesterday said the key message at POC 2011 was that this year would be more volatile than 2010. The differing price expectation is due to the uncertain geopolitics and crude oil prices and soybean oil price premium to palm olein widening due to higher palm oil supply and biodiesel. 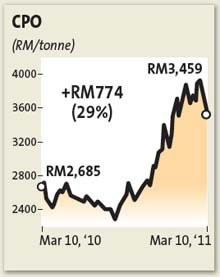 The key challenges for local planters include labour shortage leading to reduced productivity, potential demand rationing from countries sensitive to high prices, and green campaigns against producers and users.

On Bursa Malaysia Derivatives yesterday, the CPO May futures contract lost RM126 to RM3,459 per tonne amid forecasts of recovery in CPO production and stocks in the second half of this year.