Land is an asset which can be used for economic activities needed to develop a country. This asset is the first resource which can be readily used for the purpose. In fact, history has shown that many developed nations have  arrived at the “developed country”  status by starting initially with the agrarian or farming phase. It is only later on that they moved to the industrialization phase.

Development must be done in a sustainably manner. While there may be diverse and independent views of what sustainable development entails, the universally acceptable view of sustainable development is contained in the Report of the 1987 United Nations World Commission on Environment and Development. This Report is called “Our Common Future” or more commonly referred to as the “Brundtland Report”, named after Gro Harlem Brundtland who chaired the Commission.

The Report said that while there were those who wanted sustainable development considerations to be limited to “environmental issues” alone, this would have been a grave mistake. This is because environment does not exist as a sphere separate from human actions, ambitions and needs. “Environment ” is where we all live and “Development” is what we all do in attempting to improve our lot within that abode.

The key concepts for sustainability of the Bruntland Commission are:
1) Today’s needs should not compromise the ability of future generations to meet their needs.
2) A direct link exists between the economy and environment.
3) The needs of the poor in all nations must be met.
4) In order for our environment to be protected, the economic conditions of the world’s poor must be improved.
5) In all our actions, we must consider the impact upon future generations.

In present times, sustainability is said to be achieved when the three pillars of Sustainability, namely, Planet, People and Profit are taken care of.  Sustainability is, thus, confined to the 3Ps or the “Triple Bottom Line.”  The need for development to meet the needs of the poor in all nations (Concepts No.3 & 4 of Bruntland Commission)  is often forgotten.

Yusof Basiron, CEO of Malaysian Palm Oil Council, reminded the participants at the International Palm Oil Sustainability Conference or IPOSC held at Kota Kinabalu, Sabah recently of the need to include development as part of the process for sustainable development. He said that it was alright to consider only the 3Ps for sustainable development in developed countries.  For developing countries which have yet to reach developed country status, development is only in its infancy and need to be stepped up. Thus for developing countries, the sustainable development model is 3P + 1D; “D” standing for “Development”  ( Figure 1). If they are dependent on agriculture, they may not have much choice but to toil their precious limited land resource so that they can improve their livelihood. 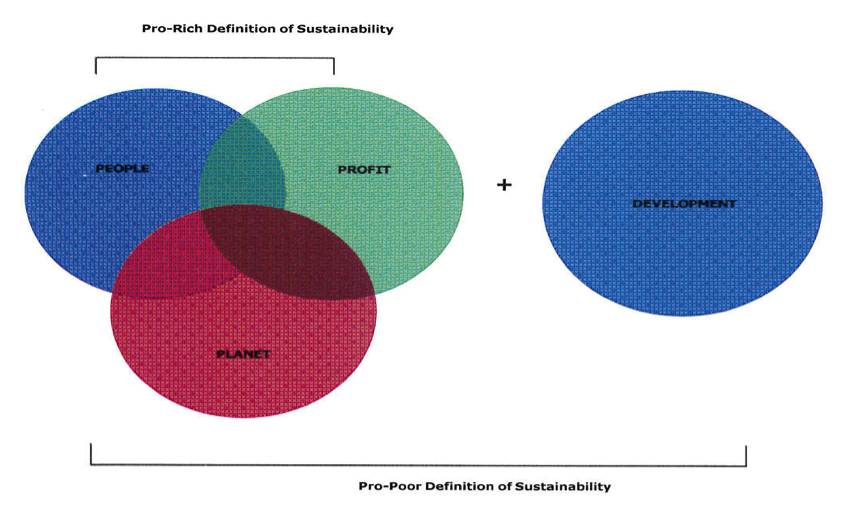 What is its implication on developing countries in the tropics? According to FAO, a forest is land with an extent of >0.5 ha, where tree crown cover is >10% and the trees can reach >5 m high at maturity.  Under tropical conditions, plant growth is luxuriant and almost all land clearings will revert back to forest in due course. In fact, almost all areas in the tropics will qualify to be classified as forests. Even a mature fruit orchard such as a durian or rambutan farm will be able to meet the FAO’s definition of forest. As such, clearing of degraded land or logged over forest in tropical countries may be misconstrued as clearing forest or deforestation.

Many developing countries such as Malaysia and Indonesia still have large forest cover. It is, thus, imperative that sustainable development in these countries will require that part of the forested areas be cleared to plant economic crops in the strive to become developed countries in the future.