A Big Fat Lie, Despite All the Research

KUALA LUMPUR: Is it true that eating food cooked in palm oil and margarine raises cholesterol levels and heightens the risk of heart attacks and stroke? No, there is no proof of that, said Malaysian Oil Scientists and Technologists Association president Tan Sri Dr Augustine Ong. And there are more than 100 studies proving that tocotrienols, a vitamin E variant in palm oil, lowers bad cholesterols. So, why is the assumption that palm oil causes heart attacks more convincing than proven studies? “Malaysian researchers are on par with international scientists. But when it comes to effective communication in layman’s terms, more needs to be done,” he said. 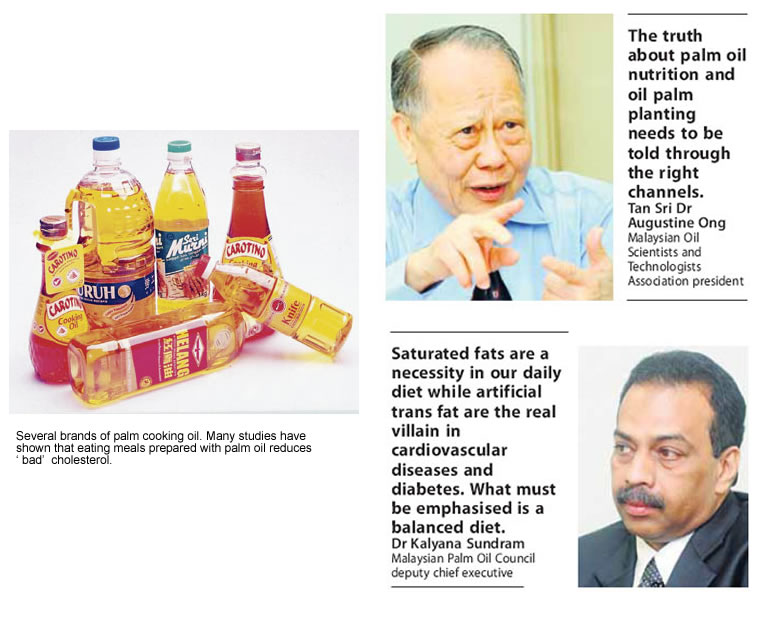 Unknown to many, Malaysia is internationally recognised as being at the forefront of research and development on oil palm genetics and palm oil nutrition. The Malaysian Palm Oil Board’s (MPOB) technology commercialisation rate stands at 20 per cent — four times higher than local universities.Last year, out of the 34 scientific findings by MPOB, four were adopted and five commercialised. Nutritional evidence on cooking oils and margarine can have a positive or negative impact on consumer perception and buying. There are 17 major vegetable oils traded in the world. And as the world’s largest palm oil exporter, it is imperative for Malaysia to be more engaging with opinion leaders. “Doctors and nutritionists are influential people,” said Ong, a former MPOB director-general. “Then, there are government officials in decision-making positions, and of course, the other group is the media.“The truth about palm oil nutrition and oil palm planting needs to be told through the right channels. “It must also be done frequently and in an easy-to-understand manner.” Last year, Malaysia exported 15.4 million tonnes of palm oil to more than 150 countries.Palm oil exports would receive a boost if the World Health Organisation (WHO) and World Heart Federation (WHF) update their nutrition guidelines on palm oil. Malaysian Palm Oil Council deputy chief executive Dr Kalyana Sundram says there is no need to have a phobia over palm oil despite global health authorities pointing out that palm oil, which is high in saturated fats, should be avoided. He says people tend to believe an idea when it is widely publicised by opinion leaders although it is unproven, “The famous French paradox reflecting the high fat consumption in France but lower heart disease mortality, is an example. “People just accept it even though there is no scientific data explaining the paradox. “Until today, there is no proof to the claim that palm oil raises cholesterol levels and causes heart attacks,” Sundram said. The “proof” that is widely cited by health authorities in the United States is the “Seven Countries Study” and earlier studies by Dr Ancel Keys and Mark Hegsted. They said countries where people consumed the most saturated fats had the highest rates of heart disease. “It seems convincing, but when the data is examined, you’ll find there are also countries where people eat plenty of saturated fats and have low rates of heart disease. “It seems that Dr Keys ‘cherry-picked’ the data that supported his theory, and quietly left out the rest,” he added. Therefore, the claim that palm oil causes heart disease is not true. It is not supported in the scientific community. “Palm oil is a healthy cooking oil that is ideal for deep frying, shallow frying, baking and even as a salad oil.” He cited dietary studies since the 1990s detailing palm oil nutrition, particularly its effect on blood lipids. Dr Tony Ng Kock Wai of the Institute for Medical Research in 1991, for example, found that when volunteers used palm cooking oil in typical Malaysian stir-fry dishes, cholesterol level was significantly reduced and the reduction was almost entirely in the “bad” LDL cholesterol. The study was carried out on 20 men and seven women of average age 24. In 1992, Sundram and colleagues carried out a study in the Netherlands on 38 men. Similarly, typical Dutch meals were cooked using palm margarine. There were no adverse effects on total cholesterol level but there was significant increase in the “good” HDL cholesterol, which protects against heart disease. Since then, there has been a burst of studies, more than 150 and counting, proving the health benefits of palm oil. However, in spite of the evidence, palm oil continues to be widely perceived as an unhealthy tropical oil. “It is time for expert groups in WHO to update and consider views from private practitioners that palm oil is a heart healthy oil,” Sundram said. “Palmitic fatty acid, a kind of saturated fat in palm oil, should not be lumped together with deadly artificial trans fat.”“Saturated fats are a necessity in our daily diet while artificial trans fat is the real villain in cardiovascular diseases and diabetes.” Sundram said it was unfortunate that nutrition guidelines by WHO, WHF and other global health authorities were causing people to become obsessed with the unproven dangers of saturated fats. “What must be emphasised is a balanced diet.” Many countries, like South Korea and Singapore, base their national nutrition policy after WHO’s guidelines on dietary fat intake. Therefore, it is in WHO’s interest to update its dietary guidelines to be more refl ective of current scientific evidence on palm oil nutrition. “The sooner the truth is communicated to consumers around the world, the better,” Sundram said.