Designed by nature, breast milk is best for babies because of its intrinsic nutritional and immunological properties. As such, human milk has become the nutritional yardstick for infant formulas worldwide.

However, previous studies have suggested that human milk may be superior to formulas in their impact on bone mineralisation during infancy. This has prompted the milk industry to design infant formulas to mimic mineralisation achieved with human milk to maximise bone health. On this point, most infant formulas provide greater amounts of calcium per volume than breast milk because of concerns that other components of the formula may interfere with mineral absorption.

Palm oil has a myriad of food uses, including its use as a major milk-fat substitute in infant formulas. The concern associated with this food use is that the palmitic acid in palm oil occupies predominantly the sn-1 and sn-3 positions of the triglyceride molecule, unlike the palmitic acid in human milk which occupies mainly the sn-2 (middle) position. During fat digestion, fatty acids in the sn-1 and sn-3 positions are cleaved off by pancreatic lipase, which are then potentially capable of binding calcium, rendering it insoluble and non-absorbable.

Not surprisingly, the effect of formulas containing palm oil on calcium absorption and bone mineralization in infancy has become a topic of interest. The issue is complicated by the fact that research findings on the association between early childhood nutrition and bone health have been inconsistent, while little is known about the effects of early infant feeding practices on bone mineralization later in life after children have been fed a complex diet for at least 3 years beyond infancy.

To provide more science-based information on the impact of formulas containing palm oil on bone health, investigators from the Nebraska Medical Center at Omaha selected 178 healthy 4-year old children (103 boys, 75 girls) to determine whether the type of feeding [exclusive human milk (n=57), an infant formula without palm olein (n=56), or an infant formula containing palm olein (n=65)] during the first 4 months of life affects bone health at 4 years of age.

The results showed that at 4 years of age, lean body mass and total body mass of males were significantly greater than the females, which were not unexpected. What was particularly interesting, however, was that no significant differences were noted in BMD, BMC, or body composition among the three feeding groups.

A) Bone mineral density (BMD) according to feeding type during first 4 months of life. 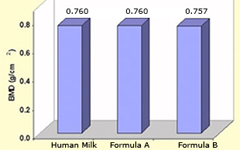 B) Bone mineral content (BMC) according to feeding type during first 4 months of life. 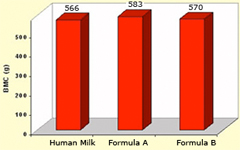 What this means is that any difference that may be observed on bone mineralization or body composition arising from different feeding practices in early life are no longer present by 4 years of age. It would seem that the many factors involved in bone mineralization in older children eating an unrestricted diet are likely to overshadow the impact of early differences. More importantly, any reservations mothers may have on the use of formulas containing palm oil for their infants should be put to rest.