The Sabah Wildlife Department’s Wildlife Rescue Unit (WRU) was born out of an urgent need to address pertinent wildlife conservation issues that Sabah is facing today. Realising the magnitude and the constraints (in both manpower and funding) to manage the wildlife and protected areas in the state, SWD has created the Wildlife Rescue Unit to provide support to the department for its efforts to conserve wildlife.

The formation of the WRU is made possible through the generous contributions from Shangri-La’s Rasa Ria Resort and MPOC’s Malaysian Palm Oil Wildlife Conservation Fund (MPOWCF). The WRU was then officially launched in May 2010, with the task of rescuing and / or translocating distressed wildlife found within the Sabah landscapes. In cases where animals are confined in pocketed areas and its habitat is no longer suitable, there is a serious need to move these animals to safer areas, such as wildlife reserves. This is a necessity to ensure that the animals are rescued and saved, and to guarantee the survival of wild populations.

Rescue and translocation operations conducted since 2010

Most of the cases attended by the WRU involve the Bornean pygmy elephant and occasionally Orang-utans and proboscis monkeys. These animals often face greater human-wildlife conflicts compared to the other protected species in Sabah. The sun bear is also facing challenges whereby many villagers were found capturing and keeping them as pets.

Until June 2012 the WRU had rescued and/or translocated:

· 7 Bornean orang-utans adults and a baby,

· 3 barking deers, snakes and other wildlife.

Due to the diverse duties carried out by WRU, the Sabah Wildlife Department has set up a Wildlife Rescue Centre (WRC) at Kg Potuki, Lok Kawi, Sabah. This centre will function as a temporary holding area for rescued wildlife. The facilities include a nursery area, holding areas for primates, small mammals, birds and also an enclosure for elephants.

MPOC recognises the need to have a balance between development (Sabah is now the largest producer of oil palm in Malaysia) and the conservation of its protected species such as the orang-utan, banteng and the Bornean pygmy elephant. The Malaysian palm oil industry is also cognizant of the fact that such developments may increase the human-wildlife conflicts that leads to these wildlife trapped in fragmented areas and straying into plantations and villages.

Therefore, the part funding of the Wildlife Rescue Unit (WRU) by MPOC with its other partners ensures that the human-wildlife conflicts can be addressed in a positive manner, whereby distressed wildlife can be translocated into a protected area or reserve. The translocations of the wildlife into protected areas will go a long way to ensure that their safety and well-being are assured, and at the same time increase its gene pool so that they can breed successfully and increase and stabilise its population size over time. Ultimately, these conservation programmes reaffirms MPOC’s objective that the Malaysian palm oil industry can co-exist with nature in a sustainable manner. 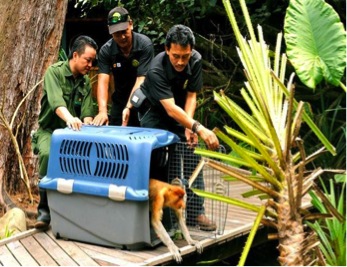 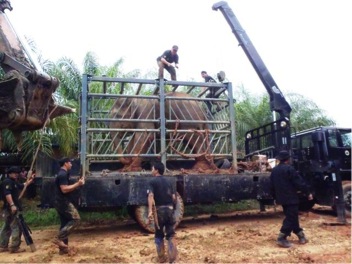 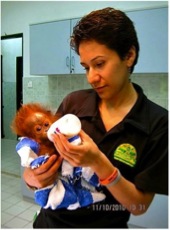 The Sabah Wildlife Department (SWD) is a department under the Ministry of Tourism, Culture and Environment of Sabah and has its headquarters in Kota Kinabalu and a number of district offices, centres and stations throughout the state of Sabah. The department is responsible for the implementation and the administration of the Sabah Wildlife Conservation Enactment 1997. Under this law SWD conserves and regulates wildlife in Sabah and manages protected areas within the state.

MPOWCF was launched in 2006 with an initial funding of Ringgit Malaysia (RM) 20 million of which RM10 million is a grant from the Malaysian government and the balance of RM10 million is provided by the palm oil industry. The Fund is administered by the Malaysian Palm Oil Council (MPOC), which has the overall responsibility to manage the various conservation projects funded through MPOWCF. Funds are provided for execution of projects and studies on wildlife, biodiversity and environmental conservation while factoring the overall impact of the palm oil industry on these parameters. The MPOWCF also accepts contributions from independent donors. For every ringgit contributed by an independent donor, MPOC will top it up with another ringgit, that is, on 1:1 basis.