Malaysian crude palm oil (CPO) prices are set to rise in the near to medium term as heavy rains are expected to lower production, prevent workers from harvesting and cause the stockpile to dip.

The last time La Nina hit Indonesia and Malaysia, the world’s top two palm oil producers, was in 2007, wreaking floods that disrupted harvesting and transport of the commodity. It saw CPO prices surge to RM4,300 a tonne in March 2008.

CPO prices are currently hovering around the RM2,400 and RM2,500 a tonne level.

Felda Global Ventures Holdings Sdn Bhd president and chief executive officer Datuk Sabri Ahmad said that a strong La Nina will have a significant impact on this year’s production, which is expected to be flat again.

“During the second half of this year, CPO prices should be higher at RM2,600 and RM2,700 a tonne,” Sabri told Business Times in a telephone interview. 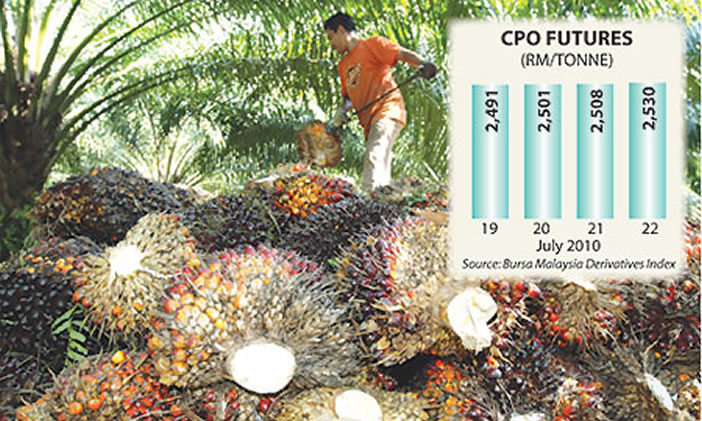 “Oil palm trees are very hardy and can survive floods as long as they are not submerged for days or weeks. Impact of La Nina on CPO price, production and stockpile, however, will not be immediate,” Ahmad said.

“The whole world weather is changing very rapidly. If La Nina sets in during the second half, it will coincide with seasonally higher production months. If this happens, palm oil prices, for sure, will surge,” Lee said.

TH Plantations Bhd managing director Datuk Zainal Azwar Aminuddin said that oil palm trees generally require moisture, but too much water can destroy the trees and floods may cause companies to lose on crop recovery.

“However, oil palm companies with good roads may not be significantly affected,” he said.

For TH Plantations, its crops in Sabah have been experiencing dry weather since January.

Good rainfall well distributed in the second half of the year will enable the company to have healthy fresh fruit bunches.

Lipochem (M) Sdn Bhd managing director P.M. Koh held the view that La Nina would hurt biodiesel companies because industry players would not blend their palm oil into biodiesel at a time of high CPO prices.

“They will not revert to biodiesel unless the government makes it mandatory, such as in Indonesia where Pertamina is required to turn 5 per cent of palm oil into biodiesel,” Koh said.