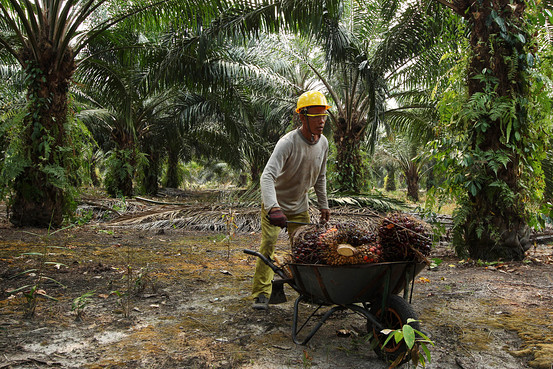 The price of palm oil is being pushed higher by Indonesian and Malaysian efforts to cut fossil-fuel use, and this is feeding through to the cost of many products sold in supermarkets world-wide.

The two countries, which together produce 85% of the world’s palm oil, have long had government mandates to divert some of that palm oil to make biodiesel for blending with transport fuels or for use in industry. But increasing amounts are now ending up in motorists’ fuel tanks.

Palm oil’s growing use as a biofuel is reducing its availability for other uses, and this has helped push its price up substantially. That, in turn, is adding to the costs for companies world-wide that use palm oil in products ranging from ice cream to cosmetics and washing powder.

This year, about 7.7% of Indonesia’s output of 31 million tons is expected to be used to make biodiesel, up from 1.8% to 2.1% a year ago. That helps the government save some of the billions of dollars the country spends on importing oil and on keeping the price of auto fuel artificially low through subsidies.

Palm-oil output by Indonesia and Malaysia this year is on track to be around 50.4 million tons, up from 47.8 million tons last year. Increasing output to meet rising biofuel needs isn’t an easy option given controversy over deforestation, land-use restrictions and the environmental sustainability of the industry.

Higher crude-oil prices in world markets last year—crude has been on an uptrend for around 18 months—has helped drive demand for biofuel.

The country relies on imports for around 40% of oil needs.

Global benchmark Bursa Malaysia crude palm-oil futures slumped to a 45-month low in July 2013, of 2,137 ringgit a ton, and these have since climbed back by 15% to 2,460 ringgit on Thursday.

One factor in that price recovery was unseasonably dry weather earlier in 2014, which cut palm-oil output. Another was more blending for biofuel.

More recently, though, prices have eased slightly from an 18-month high reached in March. But if the El Niño weather system, which tends to hurt palm-oil output, arrives this year as weather forecasters increasingly expect, this could bolster the price late this year or in 2015.

Because higher palm-oil prices have increased the cost of making biodiesel, Indonesia is unlikely to meet its target to blend 3.4 million tons of palm oil in 2014, and probably will use about 2.4 million tons instead, said the Indonesian Palm Oil Association’s executive director, Fadhil Hasan.

Indonesia’s government started development of the biofuel industry in 2006.

Oil-based transport fuels containing 1% of the product were introduced in 2008 and targets were increased later, to 7.5%, and then in September 2013 to 10%. Longer-range plans call for this to rise to 20%.

Both of the major political parties in Indonesia’s presidential elections due July may further reduce transport fuel subsidies, which should ensure strong future demand for palm oil for blending.

In Malaysia, the government expects to fully implement 5% palm-oil biodiesel blending nationwide by July this year. The country introduced its national biofuel program in 2006.

Corrections & Amplifications  Palm-oil output by Indonesia and Malaysia this year is on track to be around 50.4 million tons, up from 47.8 million tons last year. An earlier version of the story incorrectly gave the figures as 50.4 tons and 47.8 tons.