OBSERVATIONS: It was total capitulation by the bulls last week, leaving the bears in absolute control of Kuala Lumpur CPO futures market – for now and in the foreseeable short- to medium-term future.

The benchmark August 2010 contract plummeted to a seven-month low of RM2,379 a tonne as long position holders rushed for the exits last Thursday and Friday.. Heavy liquidation of long (buy) contracts were evidenced by the bulge in turnover for the August contract to 48,982 contracts last week, significantly higher than the previous week’s total volume of 33,061 contracts. The August 2010 contract settled last Friday at RM2,386 a tonne, down RM88 or 3.56 per cent over the week. 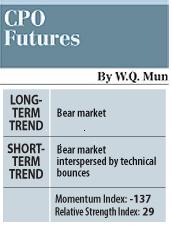 Significantly this market is now consigned to a lower price plane, presently determinable at between RM2,385 and RM2,425 – provided that that trading band is not broken in near-term trade. The breakdown in mid-week trade below the erstwhile RM2,425 short-term support level signalled this market’s descent.

News reports finger weakness in the palm oil cash market as the reason for this market’s plunge last week. That suggests weakness in demand for palm oil, not evident from the latest export estimates.

Export monitors Societe Generale de Surveillance and Intertek Agri Services’ combined June 1-10 export estimates averaged 429.000 tonnes, 69,000 tonnes or 19.18 per cent above that for that shipped out in the similar period in May.

Conclusion: This market will be interspersed by technical bounces as it attempts to make its way down to – and maybe test – the next major RM2,300 a tonne support level. 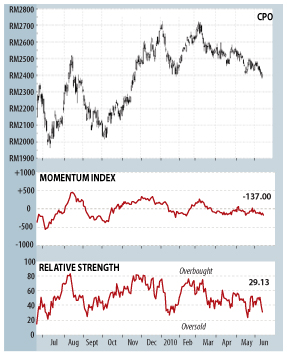 n THE RELATIVE STRENGTH INDEX:This indicator is most useful when plotted in conjunction with a daily bar chart and may be interpreted as follows:
(a) Overbought and oversold positions are indicated when the index goes above or below the upper and lower dotted lines.
(b) Support and resistance often show up clearly before becoming apparent on the bar chart.
(c) Divergence between the index and price action on the chart is a very strong indication that a market turning point is imminent.