OBSERVATIONS: Beware the springing of a bear trap.

event may not necessarily happen. It may not even happen, But the

gains or cut losses short if and when it should happen. 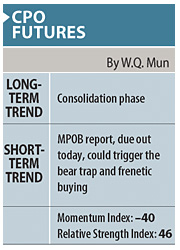 reason for the potentiality of such an event happening is the

single week, while the benchmark July 2010 contract plunged to an

Another reason is the

surprising resilience of this market in the face of an extraordinarily

fear of contagion to other debt-ridden European Union countries, the

around US$77 a barrel, among others), not to mention intense jawboning

by market players and commentators about deterioration in the comodity’s

fundamentals in their attempts to talk down this market.

Despite the odds stacked against it this market, the active July 2010

contract managed tp claw back up above the psychological RM2,500 level,

the week. And despite the odds stacked against it, this market remained

ensconced within its short term RM2,470 to RM2,595 trading range, which

could be viewed as a sign of underlying technical strength.Conclusion:

The springing of a bear trap, if it happens, would see this market

staging a strong technical rebound.No one can tell what event –

or catalyst – will trigger off the bear trap, if it happens. However,

if any event can trigger off the bear it trap, it probably will be the

stocks, due out today. 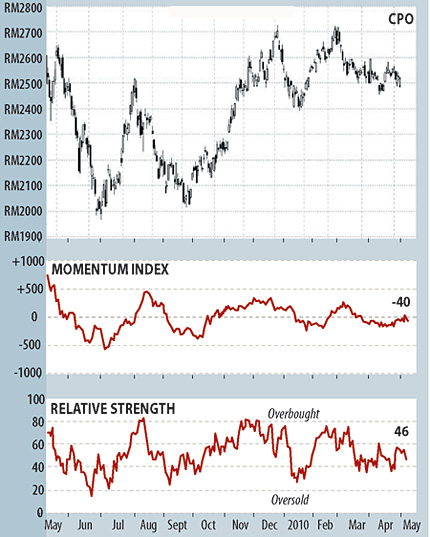 HOW TO USE THE CHARTS AND INDICATORSTHE BAR AND VOLUME CHART: This is the daily high, low and

technical correction or a reversal in the near future. THE