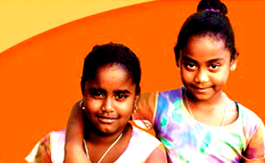 South African scientists have developed a banana-flavoured spread fortified with red palm oil from Malaysia under a project to reduce Vitamin A deficiency, particularly in rural areas of the country. The highly nutritious product has since been approved by the Department of Health for use in school feeding schemes. Two teaspoons per day of the spread, Carotino, will provide up to 76% of a child’s daily recommended allowance (RDA) of Vitamin A, according to the scientists.

Although fortification of staples is mandatory in South Africa (SA), they say the targeted children only get a fraction of their Vitamin A RDA through school feeding schemes. Launched in April, the spread is fortified with Vitamin C, which is not included in the current mandatory fortification cocktail due to practical problems. It also contains zinc, selenium and iron.
Primary school children in the KwaZulu-Natal and the Western Cape provinces, who took part in an eight-month trial, gave the product the thumbs-up, with the majority indicating that they prefer it to peanut butter and jam because of the taste.

Nutritional researcher Dr Spinnler Benade of the faculty of applied sciences at the Cape Peninsula University of Technology worked for eight years to develop the spread. Also involved in the project were Malaysian supplier of red palm oil, Carotino, and South African manufacturer Pioneer Foods. At the Red Palm Oil Road Show organised by the Malaysian Palm Oil Council in Johannesburg in April, Benade said the focus of supplementary feeding has mainly been on providing energy or satisfying hunger– and not addressing nutritional deficiencies. “Red palm oil can play a huge preventive role – to a degree that it could have a big positive impact on school attendance,” he said.

Benade is currently focusing his research on the potential benefits of red palm oil to the body’s immune system. Presenting the study findings, Dr Lize van Stuijvenberg of the Medical Research Council’s Nutritional Intervention Research Unit in Cape Town said more than 30% of almost 400 primary school children who took part in the study were Vitamin A-deficient. Under the feeding programme, 17% of the RDA for Vitamin A is provided through a sandwich made with fortified
bread, peanut butter and jam. Use of the spread increased the level to 76% or more depending on the conversion factor of beta-carotene to retinol equivalents. Haemoglobin levels improved among many children who were anaemic at the start, after they consumed the spread over the study period. Red palm oil can also be incorporated in other food products, such as muffins and cookies, thereby raising the beta-carotene content of these products significantly.

Unlike peanut butter, which carries the risk of being contaminated with aflatoxin that can cause liver cancer, Carotino showed no fungus growth even without refrigeration for over six months. It did not turn rancid either because of its high anti-oxidant status. The bright yellow colour of the spread indicates the significant level of carotenoids naturally present in red palm oil. No additional colouring is therefore required.

Red palm oil is considered a ‘neutral’ or ‘balanced’ oil that contains 40% saturated fats, 50% mono unsaturated fats and 10% poly unsaturated fats. For this reason, the spread is free of trans fatty acids. Carotino contains carotenoids and tocotrienols, both of which are powerful components of Vitamin E found in various plant sources. Another advantage is its price, which compares well with peanut butter. The spread is now only available to suppliers of feeding schemes, but could be produced commercially later.