The market plunged at first to a low of

RM2,434 a tonne based on the benchmark October 2010 contract. After that

it made a U-turn soaring to a high of RM2,539, settling on Friday at 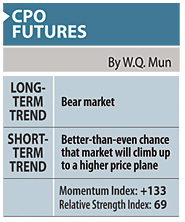 Apart from falling from a

down some 28,000 tonnes compared to that for the similar period in June.

starting on September 10, the latest export estimates were

like Pakistan would be stocking up now on cooking oil.

considering that export estimates of late have a tendency for volatility

volatile, market players may have considered the July 1 to July 25

export estimates an aberration. Much of how the market will perform this

week depends on the export estimate for the month of July, which

should be common knowledge .

technical indicators are mixed on the immediate direction of this

market, the bullish US soya bean oil futures market, thanks to US dollar

weakness, has and will provide a positive backdrop that should enable

the market to poke through and go above the RM2,520 immediate overhead 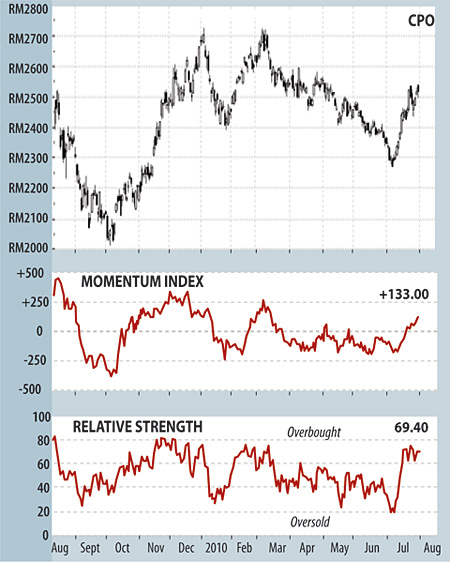 # THE BAR AND VOLUME CHART:

# THE MOMENTUM INDEX: This line plots the short/medium-term direction of the market and may be interpreted as follows:

is the case.
(b) A loss in the momentum of the line (divergence) when

very strong indication that a market turning point is imminent.

The subject expressed above is based purely on technical analysis and

opinions of the writer. It is not a solicitation to buy or sell.

The writer welcomes comments and feedback. He can be reached at mavernwqmun@gmail.com