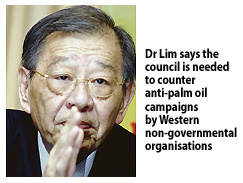 “The palm oil industries of both countries are

worth over US$50 billion (RM155 billion) a year, commanding a market

share of 60 per cent of the world’s 17 oils and fats market.

“Naturally, our competitors like the soyabean and rapeseed producers

opening the Second International Conference on the Future of Palm Oil

The council would complement similar moves at the government level

under a 2007 pact between Kuala Lumpur and Jakarta. The two countries

Malaysia’s timber industry did the same in the 1980s to

Dr Lim said the palm oil council should be based in

Europe and the US, backed by public relation firms funded by the

industry via a cess collection at a rate of 0.001 per cent of revenue

“The industry should also appoint an ambassador

protectionist measures anymore. Therefore, they have been using NGOs to

attack Malaysia and Indonesia under the guise of environmental concerns.