SHAH ALAM: CB Industrial Product Holding Bhd (CBIP) has rebutted allegations that its subsidiary had obtained a contract without the proper tender procedure. It was reported on Tuesday in a local Chinese daily that Felda Palm Industries Sdn Bhd, a subsidiary of Felda Holding Bhd, had awarded the contract to supply a system for the extraction of palm oil, called the continuous steriliser (CS) system, to Modipalm Engineering Sdn Bhd, the subsidiary to CBIP, without a proper tender procedure. 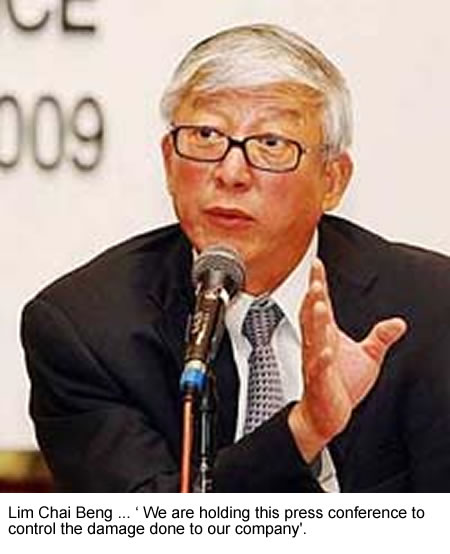 The report had also alleged that Modipalm was linked to one of the board members of Felda, and that the CS system was used by 11 of Felda’s oil palm mills under a RM160mil contract. The report, quoting the secretary of “1Malaysia Graduation Youth Club”, also said an investigation report would be handed to the Anti Corruption Department and urged the Prime Minister to look into the matter.
At a press conference yesterday, CBIP managing director Lim Chai Beng countered the allegations, saying that he was unclear on the motive. “We are holding this press conference to control the damage done to our company,” he said, adding that these allegations had caused a loss of business opportunities. “We will leave it to the board of CBIP to decide on the next course of action,’’ he said. The board is expected to meet next month. He acknowledged that the chairman of CBIP, Tan Sri Yusof Basiron, was also a board member of Felda Holding; however, the conflict of interest did not arise. “When it comes to matters like awarding of contracts or transactions, Tan Sri Yusof has to abstain from voting, under Felda Holding’s rules,” he explained. He reiterated that the contract awarded to Modipalm had gone through the proper procedures, and refuted an allegation in the report that Modipalm was a joint-venture between a Chinese and the Malaysian Palm Oil Board. “Modipalm is a wholly-owned subsidiary of CBIP, which is a public listed company,” he said. On the performance of the CS system, he said it was an automatic system that was scientifically proven to be more efficient and environment friendly. Source: The Star