Celebrating and Sustaining Our Iconic Species through Conservation

The world’s wildlife are faced with many challenges, the biggest threats being habitat loss due to cattle ranching, agricultural expansion and development. Activities related to wildlife trade such as poaching and hunting also inflict immediate threat to many iconic species.  Elephants, pangolins, rhinoceros, sharks, tigers are among the most critically poached and trafficked species across the world. Impacts of wildlife trade are very significant, causing a huge decline of up to 62% of wildlife populations1. Governments, law makers, industry members, NGOs and consumers across every region are scaling up their efforts to protect wildlife. Everyone has a role to play in protecting wildlife and its habitat. Together, these conservation initiatives can make a difference.

One of the most important elements in wildlife conservation is creating greater awareness especially among the general public. As such, there are many conservation awareness campaigns such as World Wildlife Day on 3 March, International Day for Biological Diversity on 22 May and many more. These events are held to raise awareness of a specific species, to highlight its threats and conservation status, and promote the benefits of biodiversity and its protection. Some of these campaigns made a huge impact in creating better awareness and resulted in an increase in fund-raising for certain conservation groups2. For this month of August, let’s take a look at some of the wildlife in Malaysia and how the Malaysian palm oil industry is looking into the protection and conservation of these iconic species:

i) About Sun Bears 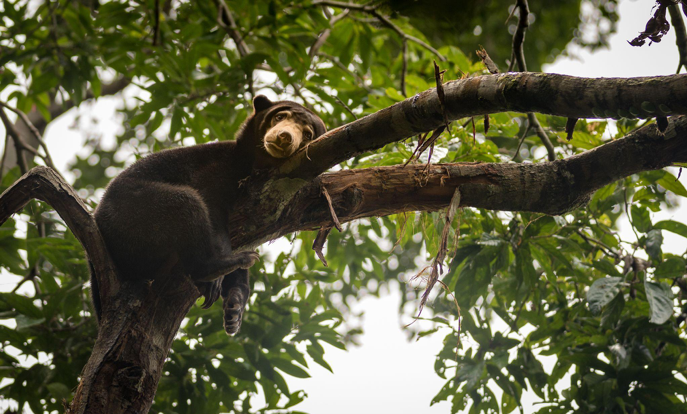 Sun bears (Helarctos malayanus) are one of the 8 bear species in the world. Found mainly in South East Asia, sun bears are the smallest and least known amongst the bear family.

Unfortunately, sun bears are threatened with extinction. They are classified as ‘Vulnerable’ under the IUCN Red List3. This is primarily due to poaching and illegal wildlife trade, followed by land use changes. Sun bears are hunted for their gall bladders, prized for its purported medicinal qualities. The cubs are captured and illegally sold as pets.

iii) How are Sun Bears Conserved in Malaysia, and the Roles of Malaysian Palm Oil Industry 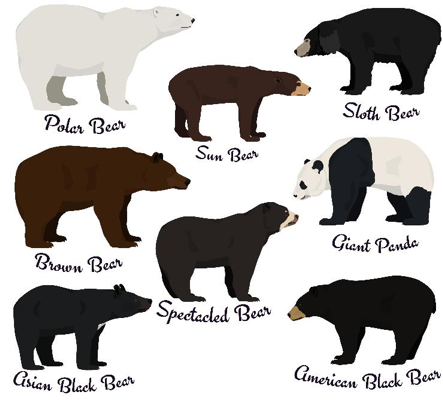 There are two main sun bear conservation efforts in Malaysia, and both are supported by the Malaysian palm oil industry. One is the Sun Bear Conservation Programme in Peninsular Malaysia, which was launched by FGV Holdings Berhad in 2018, in collaboration with PERHILITAN, MNS and UKM4.

In Sabah, conservation efforts are through the Bornean Sun Bear Conservation Centre5, located just across the Sepilok Orangutan Rehabilitation Centre. It was established in 2008 as a rescue and rehabilitation site for Bornean sun bears, and is currently housing 44 sun bears. The centre received financial support from Yayasan Sime Darby in 2013 to enhance its centre’s operations6.

In addition to the financial support above, the Malaysian palm oil industry and its plantations are also prohibited from endangering sun bears, (which is a protected species) as required by MSPO and RSPO sustainability certification schemes. This ensures that these animals will not be harmed by the plantations and workers. Instead, plantations provide full assistance when coming across displaced or injured sun bears, ensuring that it receives medical attention and care from the wildlife authorities.

i) About Malayan Tiger 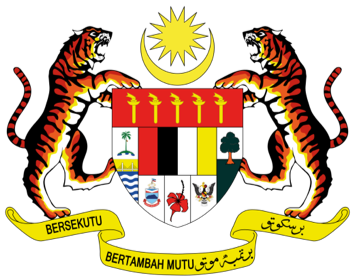 The Malayan Tiger (Panthera tigris Jacksoni) is a sub-species of tiger that exists exclusively, only in the jungle of Peninsular Malaysia. The tiger is so rare and yet so majestic that the Malay culture has an utmost respect for this species. They are heavily featured in the Coat of Arms of Malaysia as supporters, protecting the shield or Escutcheon. These tigers symbolize strength and courage.

The classification of these tiger subspecies remains divided among the scientific community. However, a more recent DNA molecular analysis strongly supports the results of several earlier publications in the six living, three extinct subspecies recognition7. 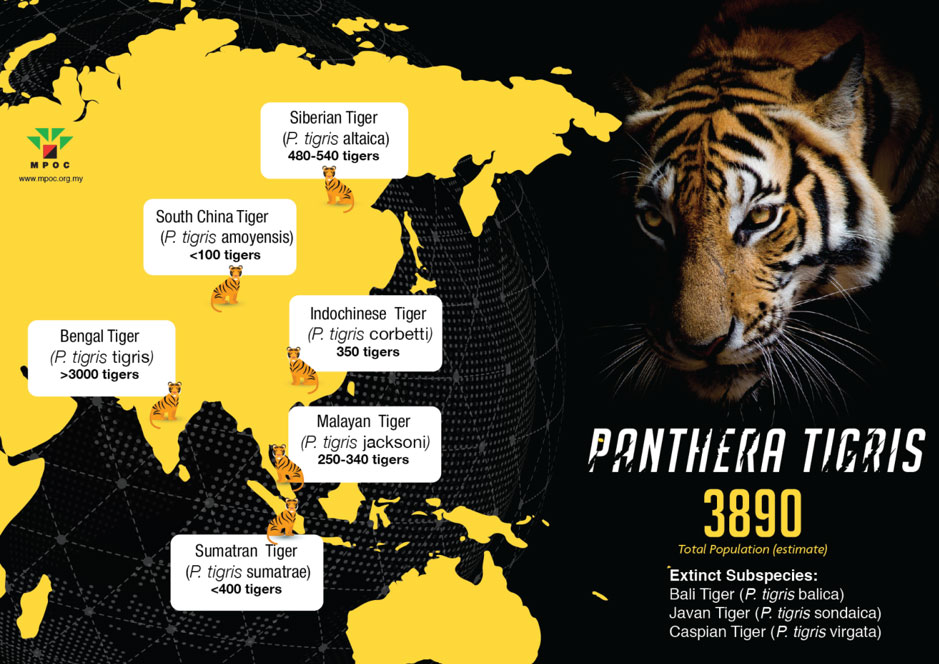 The 1st National Tiger Survey conducted in 2016-2018 showed that the population of Malayan Tigers is less than 200. Therefore due to the low population number, they have been classified as ‘Critically Endangered’ by IUCN Red List of Threatened Species8. Responding to this crisis, the government of Malaysia through the Department of Wildlife and National Parks (PERHILITAN) Peninsular Malaysia launched the ‘Critical Tiger Conservation Action Plan’.

Poaching and illegal trade of high-value tiger products including skins, bones, meat and tonics are primary threats to tigers, which led to their recent disappearance from broad areas of otherwise suitable habitat.

Conversion of forest land to agriculture and silviculture, commercial logging, and human settlement are the main drivers of tiger’s habitat loss. In addition to this, the construction of roads that separate tiger habitats also led to tiger roadkills. With their substantial dietary requirements, tigers require a healthy large ungulate (such as Sambar Deer, Serow etc.) prey base, but these species are also under pressure due to heavy human subsistence hunting.

Tiger attacks on livestock and humans have also led to intolerance to tigers by neighbouring communities. This presents an ongoing challenge to managers to build local support for tiger conservation.

Through the Malaysian Palm Oil Council (MPOC) and the recently established Malaysian Palm Oil Green Conservation Foundation (MPOGCF), the Malaysian palm oil industry has further demonstrated their commitment to tiger conservation efforts by signing an MOU with PERHILITAN. Under this collaboration, MPOC and MPOGCF will be sponsoring the cost of captive breeding programme of Malayan Tiger to produce cubs with the ultimate goal to release them back to their natural habitat within 5 years. 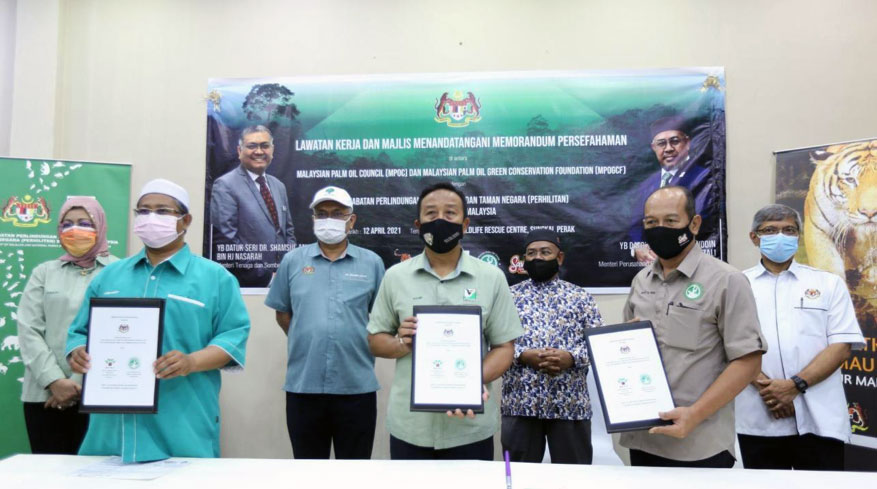 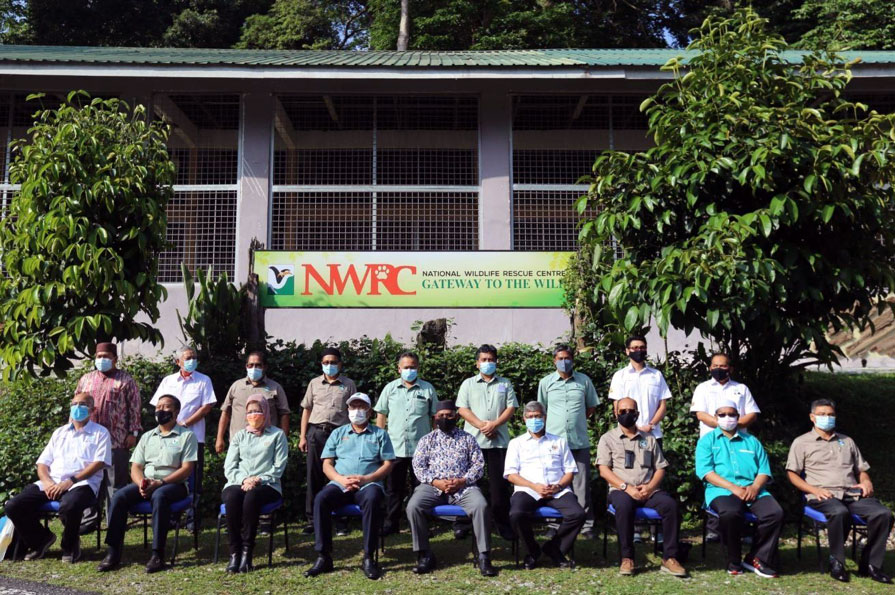 i) About Asian Elephants 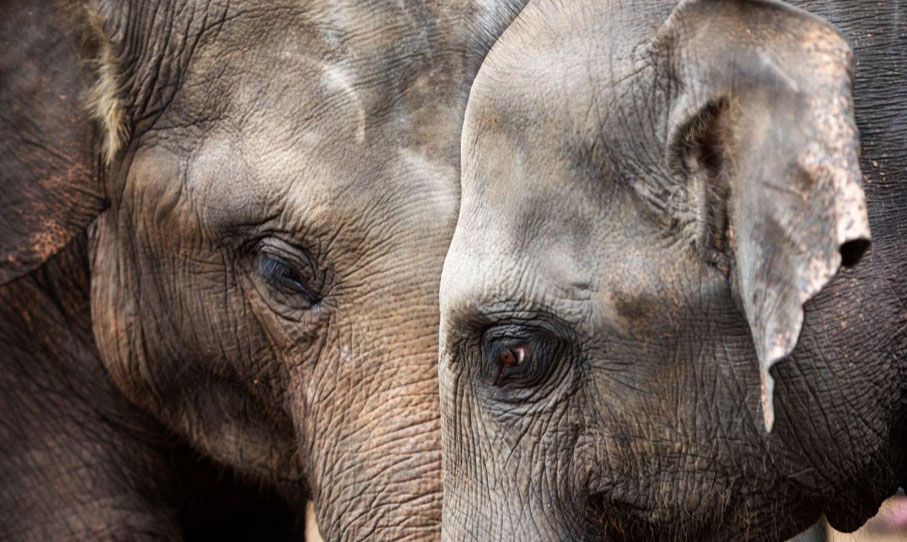 In Peninsular Malaysia, the species is still widely distributed in the interior parts in the states of Pahang – which might have the largest population, Perak, Johor, Kelantan, Terengganu and Kedah10. The current elephant population in Peninsular Malaysia is estimated at 1223-1677 individuals10.  In Borneo, elephants are found in the lowlands of the northeastern part of the island in Sabah and adjacent parts of Kalimantan, Indonesia. In Sabah, a survey by Alfred et. al.11 indicated 2,040 elephants remain in 5 ranges with the largest population being in the unprotected forests.

Ivory poaching for tusks is the main reason elephants are heavily hunted12. Elephant ivory is used to make billiard balls, piano keys, identification stamps and collectibles. Habitat loss and forest fragmentation due to agriculture and development is another threat to the survival of Asian elephants12. Human settlements and agricultural encroachment increases the pressure on elephant habitat. Shortage of food in fragmented forests corresponds to crop raiding and often results in damages to human settlement and agricultural crop which leaves them in conflict most of the time.

Bornean orangutans are classified as ‘Critically Endangered’ under the IUCN Red LIst14. Major threats include large scale land clearing for industrial agriculture. However, recent evidence revealed hunting to be a bigger contributor to the Bornean orangutan population decline over the last 200 years15, 16. In Kalimantan, Bornean orangutans were often shot for their meat or as a result of human-orangutan conflict15. Historical data shows that the decline of orangutans was observed as far back as the 19th century, way before the start of significant oil palm development in the 1970s17. 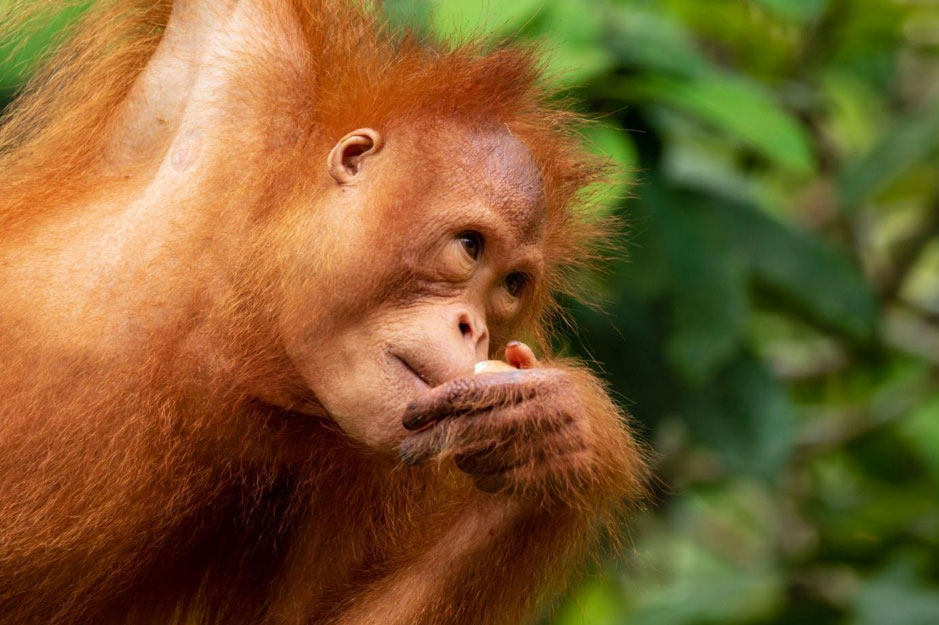 Here are some of the landmark projects that were carried out through MPOGCF’s funding and collaboration: