China is the most populous country in the world with over 1.35 billion people. The per capita oils and fats usage reached 24.6 kg in 2011, up 9.6 kg as compared to 15.0 kg in 2001 for an annual growth of oils and fats consumption by 6.0% over the last decade. During this period, palm oil consumption also showed a strong development and reached a total of 6.21 million MT in 2011, an increase of 276% from ten years earlier. This, in the meantime, led palm oil to play a more important role in the local oils and fats market. Nevertheless, 2012 is deemed to be an eventful year for palm oil. 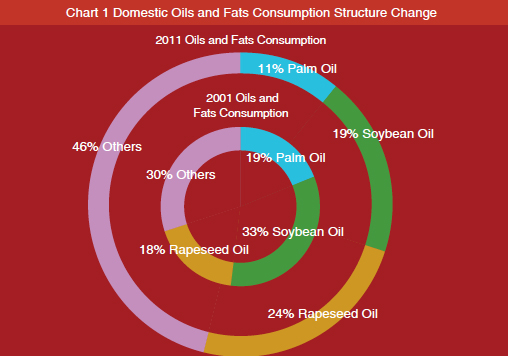 Palm oil market overview
In reviewing the palm oil import performance for the first three quarters in 2012, it experienced a small slide of 1.71% or 71,204 MT compared to the same period 2011. Further study into the major palm products consumed in China, Palm Olein (PL) showed a tiny increase of 0.10% or 3,310 MT and supported the overall import during January to September this year, while Palm Stearin (PST) arrivals dropped by 2.60% or 21,079 MT to 790,250 MT. Crude Palm Oil (CPO) experienced a decrease of 84.58% to 9,734 MT during the corresponding period. Since the abolishment of import quota of palm oil, the annual import averaged at about 5.84 million MT. According to the traditional purchasing activities, China will import more palm oil in Q4. Hence the annual import volume in 2012 is expected to reach the average level but will decrease slightly from a year earlier. With the slight reduction of palm oil import, the value of imports dropped moderately by 8.87% for the first nine months. This could also be attributed to the price drop of palm oil in the second half of this year.