CPO Down on Reports of Lower Exports

After touching an intra-day high of RM2,632 per tonne, the benchmark CPO contract for March eased slightly by RM2 to settle at RM2,590 per tonne.

But some analysts are still optimistic that CPO prices will remain bullish, pointing out that it will continue to be fundamentally supported by a stagnating yield scenario in 2010.

They said the start of the low production season in December would result in a tight inventory situation until February next year, prior to the soybean harvest by major producer Brazil.

Jupiter Securities head of research Pong Teng Siew agrees that the run-up in CPO prices will continue for the next two to three months. 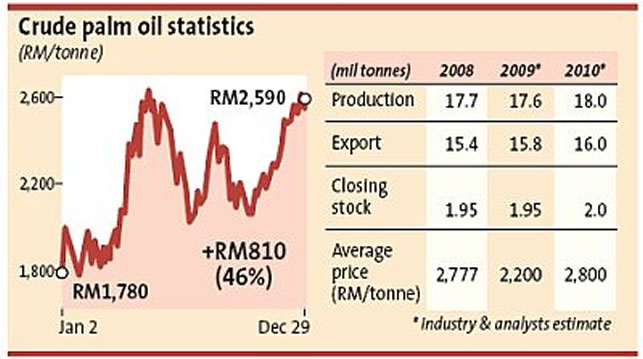 “There is a good chance for CPO to reach closer to the RM3,000 per tonne mark by March next year,” he told StarBiz yesterday.

Plantation Industries and Commodities Minister Tan Sri Bernard Dompok recently warned that palm oil output in 2010 might drop by as much as 16% because of the El Nino weather pattern.

Malaysian Palm Oil Board chairman Datuk Sabri Ahmad has revised his CPO price forecast for 2010 to between RM2,500 and RM3,000 per tonne.

CPO closely tracks crude oil prices, which is expected to remain strong at about US$80 per barrel next year.

In addition, Sabri expects a supply gap in the oils and fats market, given the deficit in palm oil supply next year with demand continuing to remain strong due to the economic recovery in major consuming nations like India and China.

A foreign brokerage report noted that “as inventories start to decline from December, there is an upside potential to CPO and plantation stock prices.”

However, despite the buoyant CPO prices, the brokerage cautions investors to remain selective as most plantation stocks have already priced in the expectations of high CPO prices next year.

Both CPO and soybean prices are expected to moderate once soybean inventories are replenished post-South American harvests.

Meanwhile, Bloomberg reported that Malaysia’s palm oil exports fell 14.5% in the first 25 days of December compared with the previous month based on estimates by Societe Generale de Surveillance (SGS), an independent cargo surveyor.

A total of 1.01 million tonnes of palm oil were tracked from Dec 1 to Dec 25, according to SGS.