OBSERVATIONS: The bear has dislodged the bull from the driver’s

This trade in places happened

contract – smashed and crashed through on the downside the erstwhile

plummeted to a low of RM2,526 before liquidation profit-taking and

short-covering ahead of the weekend gave prices a last-minute lift. The 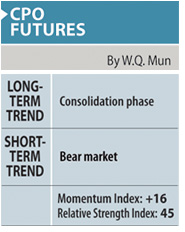 the benchmarket contract was notably higher than the previous week’s

sudden – and largely unexpected – sea change in investor sentiment has

(hitherto considered bullish) do not appear to have changed much.

fresh fruit bunches even as, based on the latest export estimates, the

trend of exports is still up.

or 11.75 per cent from thatin first-half February.

factors, however, are providing a discouraging ackdrop for the local

market. Strength in the US dollar and weakness in US soya-bean oil

futures, which also, technically, has gone into bear mode due to

expectations for a South American bumper harvest for soybeans, are

But if the technicals are any guide this market, in

the present bear phase, well fall to as low as RM2,400, the next major

high,  low and settlement prices of the most actively traded basis month

(a) Overbought and oversold positions are indicated when the index goes

above or below the upper and lower dotted lines.
(b) Support and

resistance often show up clearly before becoming apparent on the bar