OBSERVATIONS: Still smarting the fallout from China’s change in monetary policy – from loose to tight – the Kuala Lumpur CPO futures market slid further down the price chart in an extension of the previous week’s slide. Bearish sentiment was compounded by the latest – and bearish – Malaysian Palm Oil Board (MPOB) report on December 2009 trade data and end-2009 stocks. The benchmark March 2010 contract plummeted to a seven-week low before settling last Friday at RM2,487 a tonne, down RM176 or 6.61 per cent over the week. 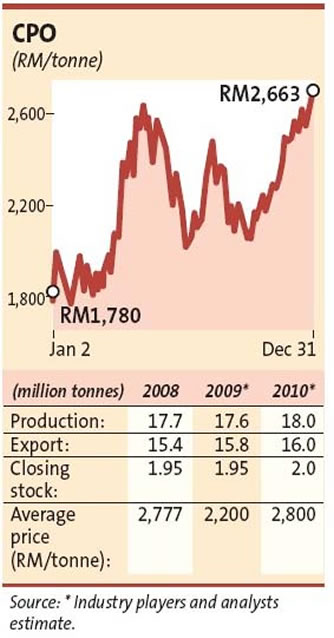 China’s central bank increased bank reserve ratios and nudged interest rates higher in the interbank market last Tuesday for the second time in a week in a sign that authorities may be trying to cool the rapid growth in that country’s economy. China’s credit tightening moves have unnerved world soyabean and soyabean oil markets, not least because it accounts for import trade of between 50 and 60 per cent of the world’s production of soyabeans. The local palm oil market felt the bearish knock-on effect of the 282-point or 6.99 per cent plunge in the US soyabean oil futures March 2010 contract to 37.53 US cents a pound.
As if sentiment was not bearish enough, the MPOB put further weight on the market with its latest monthly report on trade data, unveiled last Monday. The MPOB report was more bearish than expected: December 2009 production, put at 1.22 million tonnes, was lower than November’s by some 75,000 tonnes; but exports, at 1.501 million tonnes, were lower by 292,000 tonnes. The upshot: end-2009 stocks not only piled up to a much higher-than-expected 2.239 million tonnes, up a 304,000 tonnes or 16 per cent over that at the end of the previous month, the figure was just a whisker short of the end-November 2008’s record high stock figure of 2.266 million tonnes. Conclusion: This market will probably tread lower price levels this week. The most those stubbornly holding on to long (buy) positions can hope for is for this market to do a technical bounce before it resumes its southerly course. However, the US bellwether soyabean oil futures and the Dalian futures exchange will likely dictate the pace and direction of the local market, with the MPOB report ameliorating or aggravating the pace and direction of price changes. 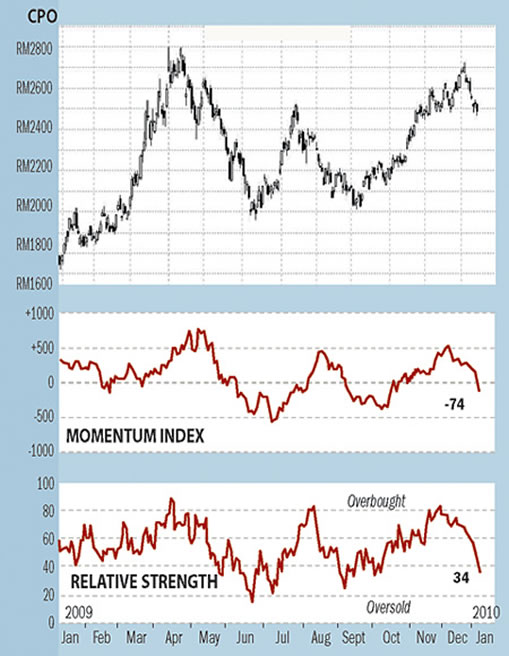 HOW TO USE THE CHARTS AND INDICATORS THE BAR AND VOLUME CHART: This is the daily high, low and settlement prices of the most actively traded basis month of the crude palm oil futures contract. Basically, rising prices accompanied by rising volumes would indicate a bull market. THE MOMENTUM INDEX: This line plots the short/medium-term direction of the market and may be interpreted as follows: (a) The market is in an upward direction when the line closes above the neutral straight line and is in a downward direction when the reverse is the case.
(b) A loss in the momentum of the line (divergence) when prices are still heading up or down normally indicates that the market could expect a technical correction or a reversal in the near future. THE RELATIVE STRENGTH INDEX: This indicator is most useful when plotted in conjunction with a daily bar chart and may be interpreted as follows: (a) Overbought and oversold positions are indicated when the index goes above or below the upper and lower dotted lines.
(b) Support and resistance often show up clearly before becoming apparent on the bar chart.
(c) Divergence between the index and price action on the chart  is a very strong indication
that a market turning point  is imminent. The subject expressed above is based purely on technical analysis and opinions of the writer. It is not a solicitation to buy or sell.
]]>
Share this post: