OBSERVATIONS: Considering the raft of bearish news on the fundamentals for palm oil, it was surprising that the Kuala Lumpur CPO futures market managed to hold its ground for much of last week, putting on a much better-than-expected performance under the circumstances. But that resilience may not last, given the chart formation last Friday of a bearish engulfing pattern, a major candlestick bear signal which does not augur well for market participants still holding on to long (buy) positions.

This market spent much of last week in narrow range trade, and only weakened some last Friday on liquidation as some players sought the safety of the sidelines ahead of the weekend. The actively-traded November 2009 contract closed last Friday at RM2,145 a tonne, down RM52 or 2.37 per cent over the week.

The size of the fall did not appear commensurate with the overwhelming amount of bearish news.

What’s more, the September 1-10 export estimate showed that last month’s trend of poor export offtake is likely to be extended to this month. Export monitor Intertek Agri Services put exports for the first 10 days of this month at 313,282 tonnes, down 53,000 tonnes or 14.50 per cent compared to that in the same period in July.

Conclusion: Because all the technical indicators, coupled with last Friday’s bearish engulfing candlestick pattern, point the palm oil price towards a southerly direction, this market could well fall this week to test the psychological RM2,100 level. HOW TO USE THE CHARTS AND INDICATORS 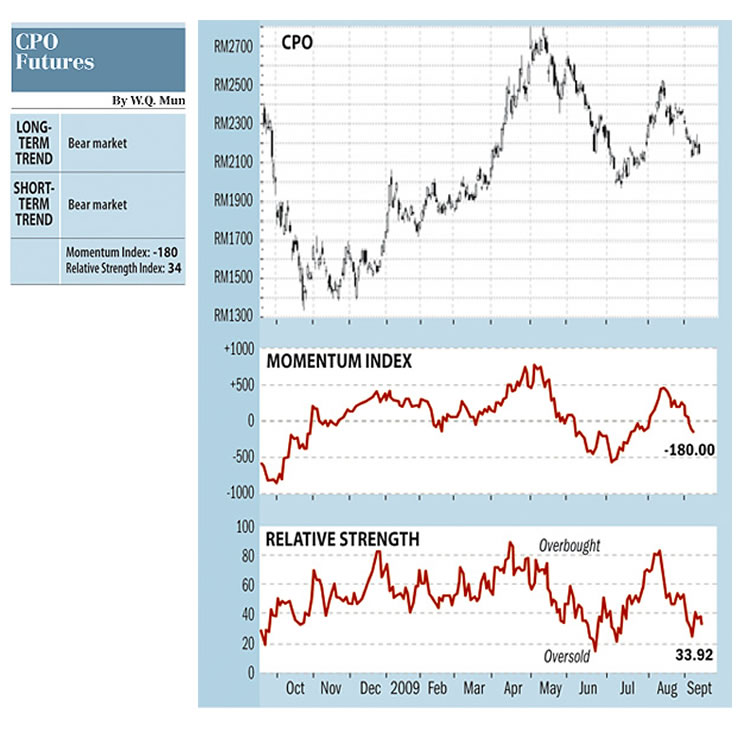