support level last week, if only slightly. But the signs point to more

hard to form a base. 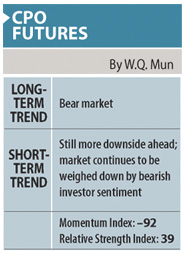 labour under the weight of expectations for a looming bumper South

Forecasts for a super South

American soyabean harvest is not really new news, but it was what the

have turned the screws even tighter on world futures markets for

Oilworld, an industry publication, raised its forecast for global

from 438.7 million last year. It raised its Argentina soyabean estimate

have become ample”, and soyabean stocks will be “substantial” until

August, which will have a bearish impact on edible oils prices, it said

in its June 11 weekly report.

amassing of short positions between April 30 and June 18, during which

the total open interest position burgeoned from 78,027 open contracts to

63,191 open contracts, has yet to unwind. This suggests that this

market could see more downside ahead as bearish sentiment continues to

prevail, especially with the bearish prospect of a bumper South American 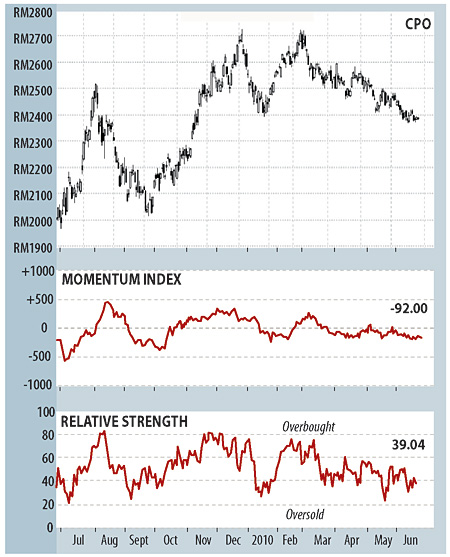 n THE BAR AND VOLUME CHART: This is the daily high, low and