And what a squeeze it was. This market, basis the third month forward contract, surged from an early low of RM2,488 a tonne to a seven-month high of RM2,628, closing on Thursday (the market was closed on Friday for a public holiday) at RM2620 for a RM90 or 3.56 per cent gain over the week.

Market talk had it that syndicates probably were responsible for the squeeze. The inordinate amount of market participants who had earlier turned bearish and had loaded up on short (sell) positions created a situation that made the market ripe for a squeeze. The syndicates exploited the situation, springing the bear trap by trading among themselves to jack up prices. The squeeze, as it was intensifying, prompted frantic stop-loss short-covering which ratcheted prices even higher.

If not for market talk that it was syndicates’ contrived trading up of palm oil futures prices, market watchers would have been hard put to come up with explanations for this market’s bullish behaviour last week, particularly considering that there appeared no strong fundamental reasons for the sharp price jumps. Stocks – the Malaysian Pam Oil Board (MPOB) put end-November 2009 palm oil stocks at 1,934,613 tonnes – are still high, and are expected to burgeon to even higher levels by the end of the year.

The month-to-date export performance was poor; export monitors Societe Generale de Surveillance (SGS) and Intertek Agri Services’ (IAS) combined average estimate for first half December totalled some 618,000 tonnes, down 78,000 tonnes or 11.0 per cent compared with that for the corresponding period in November 2009.

Conclusion: Although the present short-term uptrend, based on technicals, appears to be still intact, the market will have to contend with this seasonal factor: the tendency of a sell-off in commodity markets overall ahead of the long extended Christmas and New Year holidays as market players seek the safety of the sidelines

The pre-holiday season sell-off was already in evidence in US commodity markets last Thursday and Friday and weakness there could well be transmitted to the local market. 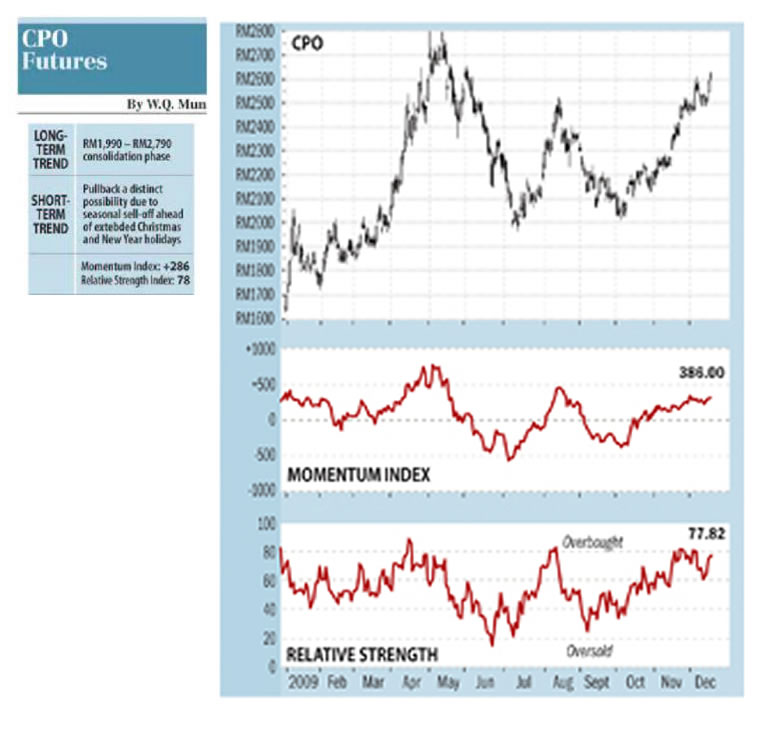