OBSERVATIONS: The rush to cover short (sell) positions, quite hectic at times, ahead of two major events this week. – the Bursa Malaysia Palm Oil and Laurics Conference and the Malaysian Palm Oil Board (MPOB) report on February trade data and end-February 2010 stock position. – lifted the Kuala Lumpur CPO futures market to an eight-week high last week.

This market fell at first, dipping below the RM2,600 mark in early trade to test the erstwhile RM2,580 immediate support level, basis the actively-traded May 2010 contract. 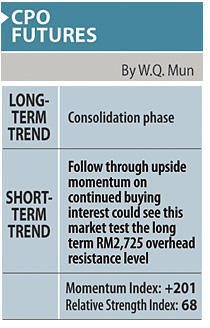 But that was before the emergence of short-covering – as evidenced by the notable contraction in the total open interest position to 81,079 open contracts from the previous week’s 82,981 open contracts – shunted this market back on the uptrack.

The one thing the bulls have in their favour is this week’s Bursa Malaysia Palm Oil and Laurics Conference.

The speakers at such conferences are invariably bullish about the commodity’s prospects, striking upbeat notes which tend to have an uplifting effect – both on market players’ spirits and prices.

That could explain why some market players who previously held shorts took no chances by covering their sell positions, despite poor export estimates for February.

Conclusion: The RM2,725 long- term overhead resistance level is the major hurdle this market must overcome on the upside if it is to unequivocably stamp its bullish credentials in the minds of the investing public.

The test of that overhead resistance level could well happen in the short-term future, if not this week. 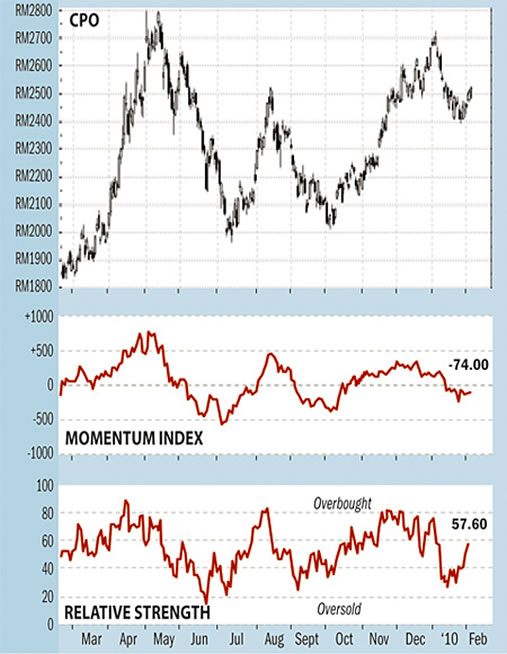 * THE BAR AND VOLUME CHART: This is the daily high, low and settlement prices of the most actively traded basis month of the crude palm oil futures contract. Basically, rising prices accompanied by rising volumes would indicate a bull market.

* THE MOMENTUM INDEX: This line plots the short/medium-term direction of the market and may be interpreted as follows:

* THE RELATIVE STRENGTH INDEX: This indicator is most useful when plotted in conjunction with a daily bar chart and may be interpreted as follows: