OBSERVATIONS: The Kuala Lumpur CPO futures market joined other major world stock and commodity markets in a collective meltdown last week. The actively-traded third month forward futures contract – the benchmark September 2010 contract – plunged not only to a new low for the year, but also to a nine-month bottom. It settled last Friday at RM2,335 a tonne, down RM49 or 2.06 per cent over the week. 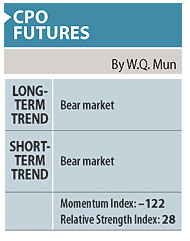 News reports have of late put much of the blame for the global financial markets meltdown on the slowdown in China’s economy. China is the world’s single largest buyer of palm oil and it would be unavoidable that the propects for palm oil would be dented if that country’s economic growth is indeed slowing down. But there’s more to it than just the China factor.

There’s also concern that the US economy is still in bad shape and some economists see as a high-risk factor the probability of a double-dip recession in the world’s largest economy, which would have even a greater impact on the health of the world economy than a slowdown in China’s economic growth. Concern over the US economy is reflected in last week’s plunge of the US dollar to a nine-week low against a basket of other major world currencies in the US Dollar Index. Then again, there is the matter of the unresolved eurozone sovereign and bank debt woes. But closer to home, market players’ concern is about the fundamentals, or more to the point, the prospect of deterioration in the fundamentals of palm oil. Export monitors Societe Generale de Surveillance and Intertek Agri Services figured June 2010 export estimates at a combined average of some 1.35 million tonnes. While that’s comparable with that for the previous month (June exports were higher by some 18,000 tons or 1.38 per cent than that for May), it does nothing to ease industry concerns over a probable build-up in palm oil stocks, given that the industry is in the April through September high production season. Conclusion: The technical picture show no signs or signals that the present cyclical downturn has hit bottom. RM2,300 is the next short- and intermediate-term support level. 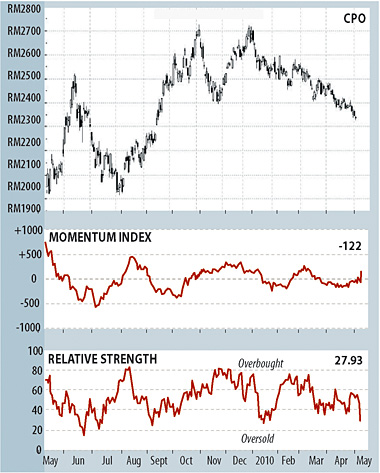 HOW TO USE THE CHARTS AND INDICATORS # THE BAR AND VOLUME CHART: This is the daily high, low and settlement prices of the most actively traded basis month of the crude palm oil futures contract. Basically, rising prices accompanied by rising volumes would indicate a bull market. # THE MOMENTUM INDEX: This line plots the short/medium-term direction of the market and may be interpreted as follows: (a) The market is in an upward direction when the line closes above the neutral straight line and is in a downward direction when the reverse is the case.
(b) A loss in the momentum of the line (divergence) when prices are still heading up or down normally indicates that the market could expect a technical correction or a reversal in the near future. # THE RELATIVE STRENGTH INDEX: This indicator is most useful when plotted in conjunction with a daily bar chart and may be interpreted as follows: (a) Overbought and oversold positions are indicated when the index goes above or below the upper and lower dotted lines. (b) Support and resistance often show up clearly before becoming apparent on the bar chart. (c) Divergence between the index and price action on the chart is a very strong indication that a market turning point is imminent. The subject expressed above is based purely on technical analysis and opinions of the writer. It is not a solicitation to buy or sell.
Source : Business Times
]]>
Share this post: