OBSERVATIONS: The Kuala Lumpur CPO futures market took a steep plunge at first, dragged down by weakness in world commodity markets overall on concerns over the US-China trade spat, but rebounded on speculative buying interest ahead of the Hari Raya Aidilfitri holiday.

The actively-traded December 2009 contract fell in early trade to test the psychological RM2,100 a tonne level, but rebounded in the later part of last week on speculative buying interest, evidenced by the burgeoning of the total open interest position to 88,636 open contracts from the previous week’s 85,950 open contracts, a notable increase of 2,686 open contracts or 3.13 per cent as market players took up new long (buy) positions.

Early jitters over the US-China trade spat, because of the US administration’s imposition of heavy import duties on made-in-China tyres, were quickly shrugged off by market players who came in to take up fresh long (buy) positions.

SGS and IAS put September 1 -15 exports of palm oil at a combined average of 534,000 tonnes, down a whopping 132,000 tonnes or 19.84 per cent compared to their estimates for the corresponding period in August.

Conclusion: Based on the technical position as of last Friday, this market should see an extension of its technically-inspired rebound in early trade this week.

However, because of the market’s two-day closure for public holidays, foreign edible oil markets, particularly the US soyabean oil futures market, could influence how the local market performs when it reopens tomorrow. 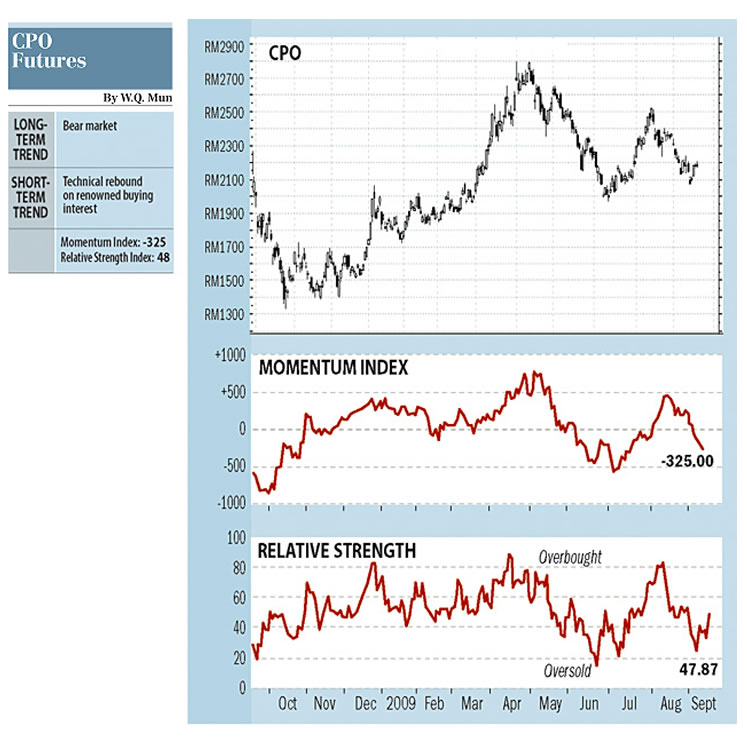